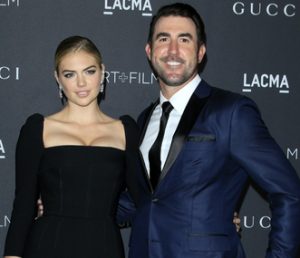 Detroit Tigers pitcher Justin Verlander did not win the American League Cy Young award on Wednesday. His soon-to-be wife, Kate Upton, was not happy about it.

Verlander finished second in the Cy Young voting to Rick Porcello of the Boston Red Sox, despite earning more first place votes 14 to Porcello’s 8). Two of the 30 writers who cast ballots for the award left the Tigers pitcher out entirely of their top five. And it was that fact which drew Upton’s ire, and prompted a vulgar Twitter rant:

Hey @MLB I thought I was the only person allowed to fuck @JustinVerlander ?! What 2 writers didn’t have him on their ballot?

He had the majority of 1st place votes and 2 writers didn’t have him on their ballots?!! can you pick more out of touch people to vote?@MLB

Sorry Rick but you didn’t get any 1st place votes? you didn’t win. #ByeFelicia @MLB keep up with the times and fire those writers

MLB.com’s Bill Chastain, one of the two writers who left Verlander off his ballot (the other was Fred Goodall of the AP) defended his vote to the New York Daily News.

“I feel bad that people are upset about this; I did the best I could,” Chastain told the Daily News. “I went around the clubhouse, I asked guys. I agonized over this. The biggest thing for me was between (Baltimore closer Zach) Britton and Porcello.”

Of course, that explanation is not likely to satisfy Upton. Noah Syndergaard of the Mets tried to offer some support:

It's OK Kate…I only got 4 votes…..total. Nobody likes me ?https://t.co/NVkQvZ7sKu