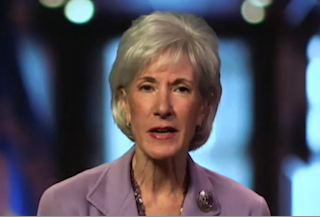 On the final day for Americans to sign up for coverage under the Affordable Care Act, Health and Human Services Secretary Kathleen Sebelius appeared on HuffPost Live to discuss some of the Obama Administration’s efforts to get young people to sign up for insurance, most notably with President Barack Obama’s Between Two Ferns interview with comedian Zach Galifianakis. “We definitely saw the Galifianakis bump,” Sebelius said of the Obamacare sign-ups that followed the video.

“The website traffic surged once the Between Two Ferns video went on,” Sebelius said, though the also gave credit for reaching the younger demographic to pitches made by NBA players Lebron James and Kevin Durant and singers like Alicia Keys and Katy Perry. “As a mother of two 30-something sons, I know they’re more likely to get their information on Funny or Die than they are on network TV,” she said.

Sebelius added that she was not disappointed that she didn’t get to sit down with Galifianakis herself. “His name is on this bill,” she said of Obama, “this is his signature policy issue, it’s something that he was committed to when he ran for president, he was the first president in the history of the United States to be able to deliver on health reform, so he gets the chair with Zach.”

As of today, Obama’s Between Two Ferns is the third most-watched video ever on Funny or Die with over 20 million views (Only Will Ferrell’s interactions with landlord Pearl have been seen more times). If you still haven’t seen the video, you can watch it below, via Funny or Die: