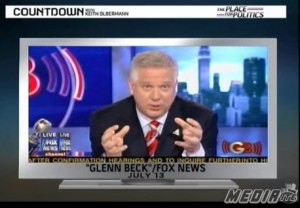 On last night’s Countdown, host Keith Olbermann unloaded on Glenn Beck for a remark he made that implied that Jews were responsible for the death of Jesus. Calling Beck “anti-Semitic” (when teasing the segment), Olbermann also invoked recent race-ranter Mel Gibson, and mocked Beck’s elevation of Roger Ailes to Civil Rights hero, before chewing over the whole thing with Common Nonsense author Alex Zaitchik.


I’m going to give Beck the benefit of the doubt here, as I don’t think a charge of anti-Semitism or racism should be made lightly. It’s entirely possible that Beck is ignorant of the historical context of “Passion Plays,” and their relationship to anti-Semitism. It’s also possible that he does know something about it, but didn’t make the connection between that, and the notion that Jesus would “make the Jews pay.”

Either way, I don’t think this is anti-Semitism on Beck’s part. Rather, I would surmise that it is a symptom of conservative contempt for what they derisively call “political correctness,” the idea that it’s too hard to keep track of all the things that offend people. When someone says, “I don’t buy into all that PC stuff,” what they’re really saying is, “I’m too lazy to learn about people, and too arrogant to apologize.”

Sure, it’s a lot to keep track of, and sometimes, it gets ridiculous, but it is worth the effort. It’s not just about not offending people, although that’s a pretty decent motivator. It’s about becoming a smarter, more empathetic person.

A neat fringe benefit to making an honest attempt at sensitivity is that when you do innocently offend someone, they’re a lot quicker to give you the benefit of the doubt. This is a lesson that Glenn Beck hasn’t learned. He wants to be granted extraordinary leeway, while he makes his career by granting none.