Killing to Save in Syria: When Liberalism is Lethal 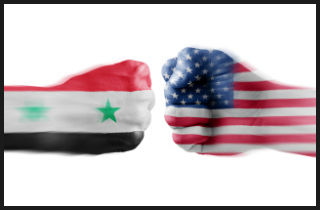 In the debate on Syria, progressive pundits are letting us know that do-gooders can’t be peaceniks. Recently, pro-war commentators on liberal media outlets have greatly outnumbered the doves, with MSNBC leading the way. These humanitarian interventionists understand what the most famous progressives of all time made clear, that the obligation to rescue the unfortunate comes with an obligation to kill. What they don’t understand or willfully ignore is the lesson of history, which is that when the United States has taken on the responsibility for the well-being of humanity, it has destroyed far more lives than it has saved.

Last week on MSNBC’s All In, Chris Hayes featured a host of left-of-center hawks, including Rep. Eliot Engel (D-NY), Julia Ioffe of The New Republic, Iraqi-American writer Zainab Salbi, who called for a “long-term intervention,” Mouaz Moustafa, a representative of the Syrian rebels, and Tom Perriello of the Center for American Progress, who has argued elsewhere not just for missile strikes against Assad but for “a more aggressive posture that would potentially include regime transition.” On his show, Chris Matthews justified bombing the Assad regime by declaring that even “Hitler didn’t use” chemical weapons. The liberal network’s call to war climaxed with a stunning piece of demagoguery on Wednesday’s Last Word, when reporter Richard Engel put a 10-year-old Syrian refugee girl on camera to say, “Does [Obama] want his kids to be like us? … When we get bigger, we’re going to write, ‘Obama didn’t help us.'”

Like many liberals who are asked to explain why Syria will be a good war if Iraq was a bad one, Dexter Filkins in the New Yorker wrote, “This time it’s different… What can America do? It’s not unreasonable to ask whether even a well-intentioned American effort to save Syrians might fail, or whether such an effort might pull America into a terrible quagmire…. But how much longer are we going to allow those questions to prevent us from trying?”

Even though Eugene Robinson of the Washington Post is aware that “History says don’t do it” and that “Most Americans say don’t do it,” he still insisted that “President Obama has to punish Syrian dictator Bashar al-Assad‘s homicidal regime with a military strike — and hope that history and the people are wrong.”

The New Republic, which has guided much of American liberals’ thinking since the early 20th century, has been chock-full of bellicose advice for the president. Senior editor Paul Berman wrote that we should use overwhelming military force to “help our own faction overthrow the dictator.” Editor Leon Wieseltier called plans for limited military strikes too timid, “a cop-out in the shape of a cruise missile,” and insisted that U.S. power should be “used for good and high purposes.”

This is not a new position for The New Republic or progressives. A century ago the magazine, along with most progressive intellectuals, called for the U.S. to intervene in World War I in order to save innocent Europeans from German aggressions. President Woodrow Wilson, who declared that the U.S. had the duty to “lift the burdens of mankind in the future and show the paths of freedom to all the world,” took that advice. Some 116,000 U.S. servicemen were killed and more than 200,000 wounded in the war, while countless thousands of German conscripts were cut down by American steel in what many historians now see as an exercise in imperial competition that laid the ground for the rise of fascism.

Though the Holocaust is often invoked by humanitarian interventionists, the results of the American assault on the Nazi regime were hardly a victory for humanity. American bombers not only terminated a substantial portion of the  civilian populations in France and Germany, but there is also substantial evidence that the Nazi leadership accelerated the killing of Jews as a result of American entry into the war.

Because liberals are so often accused of being “soft” on communism, it is now largely forgotten that the Cold War was their war. Harry Truman invaded Korea “to win the world back to peace and Christianity” but was left with a stalemate, an implacably anti-American regime in North Korea, 37,000 American casualties, and an untold number of ordinary Koreans in graves. Similarly, John F. Kennedy followed through on his vow to uplift “those people in the huts and villages of half the globe struggling to break the bonds of mass misery” by escalating the disastrous war in Vietnam. His successor, Lyndon B. Johnson, argued that his “Great Society” social welfare programs were consistent with the full-scale assault that he launched against Vietnamese communists, which resulted in the deaths of more than 58,000 Americans and an estimated 3 million Vietnamese soldiers and civilians.

More recent progressive-led humanitarian interventions were smaller-scale but yielded similar results. Bill Clinton‘s incursion into Somalia killed 18 American soldiers and hundreds of Somali militiamen and civilians, and brought no improvement to the world’s most misgoverned country. Likewise, NATO’s bombing of Kosovo left hundreds of civilians dead and gave the upper hand to the Kosovo Liberation Army — an organization described by Clinton’s own special envoy to the Balkans, Robert Gelbard, as “without any questions, a terrorist group” — which conducted its own campaign of ethnic cleansing after the war.

History indeed says don’t do it. But as the recent talk on Syria shows, liberals are so committed to their self-imposed role as savior that they will do it anyway. Perhaps we need to save the world from saviors, instead.

[image via Shutterstock]
— —
Thaddeus Russell teaches history and American Studies at Occidental College and is the author of A Renegade History of the United States.