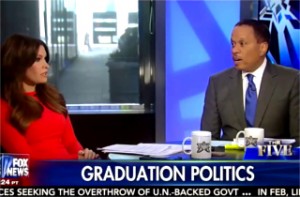 On The Five Monday afternoon, in a testy exchange on the subject of identity politics, Kim Guilfoyle accused co-host Juan Williams of “becoming infamous and also ridiculous because you put words in people’s mouths.”

Guilfoyle, praising a commencement speech by Supreme Court Justice Clarence Thomas, said, “I like his emphasis on faith and belief. Because in my personal opinion, the past eight years, we have seen under the Obama administration, they have used class warfare and race and envy to divide the nation. They have, and communities when you see Ferguson and other places—”

KG: I didn’t say that, Juan. And you’re really becoming infamous and also ridiculous because you—

JW: Because that was a ridiculous statement.

KG: You put words in people’s mouth and you paraphrase—

KG: I didn’t say that. I said the administration.

KG: And it’s true. Under Eric Holder and the Injustice Department.

KG: This is part and parcel for what happened across this country. We did not come closer together as a country. We became more divided. And there was more loss of life and destruction of property from that race and identity politics

JW: I see, because people speak out against injustice, you don’t like it and it makes you uncomfortable.

KG: Well, it’s — no it doesn’t make me uncomfortable.

JW: You have to deal with reality.

KG: No. I do deal with reality. The bottom line is they fostered an environment that was violence and that was not something that brought people together. Instead of using the opportunity as president to bring people together and blur race and gender lines — it was more about divisiveness —

JW: Oh, I see you want to blur race and gender when it makes you uncomfortable, Kimberly

JW: People in this country who have to live with police aggression—

KG: Why would I be uncomfortable with that as a Puerto Rican woman?

“The only way to blur race and gender is with alcohol!” Greg Gutfeld burst in, bringing the heated exchange to a landing. “Everybody just go out and get drunk.”