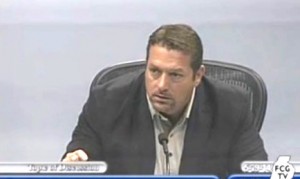 Maryland council member Kirby Delauter made the bizarre claim Saturday that a reporter was not allowed to use Kirby Delauter’s name in her article without his authorization. After Frederick News-Post reporter Bethany Rodgers politely called Kirby Delauter bananapants, Kirby Delauter threatened to sue the paper if they did it again.

On Tuesday the News-Post ran an op-ed in response with the predictable headline repeating Kirby Delauter’s name multiple times. But that was only the beginning.

“How should we now refer to Kirby Delauter if we can’t use his name (Kirby Delauter)?” the editors asked, adding:

[…] We found a great automatic online anagrammer that generated all kinds of alternatives and could make it a challenge for our readers to decode each time we have to reference the councilman: “Rebuked artily.” That was a good one. “Bakery diluter” is just silly but does have a ring about it. “Keyed rural bit” was another that caught our eye as somewhat telling, because Kirby Delauter’s pretty keyed up. We’re sure there’s a joke in “Brutelike Yard” somewhere.”

RT @abeaujon: Also read the first letter of every graf in the editorial http://t.co/PcwFcTf7kL

Sure enough, the oped is a bit long because they spelled out Kirby Delauter’s name with the first letter of each paragraph.

The paper did fit in a serious response to Kirby Delauter: “We will not bow to petty intimidation tactics because a local politician thinks he can score political points with his base throwing around empty threats,” it wrote. The editors tied in Kirby Delauter’s threat to his overall bullyish demeanor, arguing that this novelty story is actually part of why the paper has previously opposed Kirby Delauter.