Lady Gaga Refuses To Boycott Arizona, Will Peacefully Protest Instead 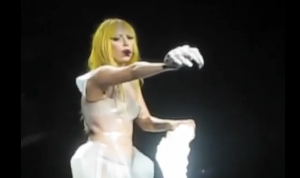 What makes Lady Gaga different than the city of Los Angeles? Well, unlike the City of Angels, the singer refuses to boycott Arizona over the controversial immigration law. A couple of nights ago, Gaga performed in Phoenix and told her screaming fans about how a “couple of really big rock and rollers” (any guesses who, folks?) called her up and asked her to cancel her show. To the delight of the “Little Monsters” in US Airways Arena, Gaga told them she would not cancel but would instead “protest actively.” The decision clearly made her fans happy. It made Keith Olbermann happy as he called her one of the sanest voices in this debate. And we can only presume it made her manager very happy.

“I got a phone call from a couple of really big rock and rollers, big pop stars, big rappers and they said, ‘We’d like you to boycott Arizona. We’d like you to boycott playing Arizona because of SB1070.’ And I said, ‘You really think that us dumb f–king pop stars are going to collapse the economy of Arizona?’ I’ll tell you what we have to do about SB1070. We have to be active. We have to actively protest. And the nature of the Monster Ball is to actively protest prejudice and injustice and that bulls–t that is put on our society! Because you’re a superstar no matter who you are, where you came from, and you were born that way. I will not cancel my show. I will yell, and I will scream louder, and I will hold you, and we will hold each other, and we will protest this state. And do not be afraid because, if it wasn’t for all you immigrants, this country wouldn’t have s–t.”

Check out Gaga’s full speech below as well as quick reactions from Bill O’Reilly and Keith Olbermann (with guest Arizona’s Rep. Paul Grijalva) below: