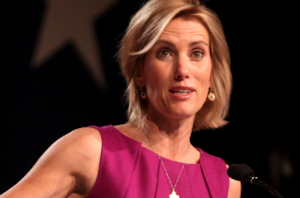 Stacey Dash told transgender people to pee in the bushes but Laura Ingraham has just set a new gold standard when it comes to advice for people who are worried about using public restrooms that trans people might be using, too. Bushes are so three weeks ago.

You probably know Ingraham best as the conservative radio host who had a very NSFW meltdown on a hot mic last April. Now, you’ll remember her as the woman who called for all adults to be strapped into diapers to avoid using inclusive restrooms. Here is her suggestion:

If you need a transcript, here’s that:

Oh, we have a new transgender update for you as well. Oh, no new transgender news for all of you who are bathroom-goers and public — you use public restrooms? I think a lot of people are going to be walking around with just Depends on from now on. They’re just not going to use the bathroom. Adult diapers, diapers for everybody. No one’s going to be going to the bathroom. You have little kids, there’s going to be no bathrooms. We’re just going to all wear Depends. Everyone will just be happy. Then you’ll be in your own bathroom. Everyone’s bathroom is just their own clothes, OK? So this is what we’re going to go to.

This angry outburst is just the latest in public outbursts by people who are upset over the recent push for transgender individuals to be able to use the bathroom that corresponds to their gender identity.