Laura Ingraham: Would A Herman Cain Presidency Be Historic Because Obama Has White Relatives? (UPDATE)
video

Laura Ingraham: Would A Herman Cain Presidency Be Historic Because Obama Has White Relatives? (UPDATE) 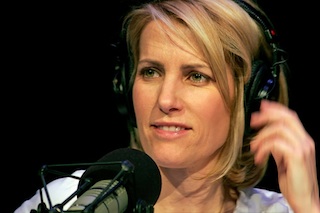 Ah the issue of race. It’s a topic that can instantly inflame even the most pleasant of conversations and probably America’s touchiest subject, like England and class, the Middle East and religion, and France and basic hygiene. It’s because of these heightened sensitivities that people should probably think twice about what they say, especially when they speak in a public forum. Take for instance comments Laura Ingraham made on her radio show that implied that President Obama wasn’t the real first black president because of his white mother.

Here’s what she said while discussing Herman Cain (transcript from Media Matters):

Ingraham just seems to be thinking out loud (radio shows are long, guys) and, as some have pointed out, it almost sounds like she realizes the implication of what she’s saying midway through. It really doesn’t seem like “Main Street black Republican” was originally where that sentence was going. I mean, I don’t know much about genetics, but I don’t think the race of your grandparent does much to decide what street you live in.

Ingraham seems to have (correctly) realized that, considering the massive amount of pride that the black community (and the nation at large) felt in Obama’s election, no one really wants a radio host splitting hairs about his ethnicity.

Really though, did we all forget about President Clinton?

UPDATE: We were contacted by Matt Wolking, Executive Producer of The Laura Ingraham Show, who offered some fairly compelling food for thought. He pointed to these comments Obama made on The View:

When asked about his background, which includes a black father and white mother, Obama said of African-Americans: “We are sort of a mongrel people.”
“I mean we’re all kinds of mixed up,” Obama said. “That’s actually true of white people as well, but we just know more about it.”