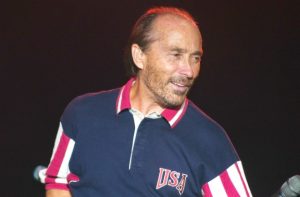 Lee Greenwood is one of a few performers who will be at Donald Trump‘s inauguration, and he has a few thoughts about the performers who have already bailed on the proceedings.

(The inaugural performers currently include Greenwood, 3 Doors Down, and Toby Keith.)

In an interview with The Hollywood Reporter, the man famous for “God Bless the USA” said that when you’re asked to perform at such an important event, it would be in “bad taste” to decline. He said this is not supposed to be political, but a celebration of the peaceful transfer of power.

Jennifer Holliday was slated to perform too, but she withdrew after getting flak from fans. Greenwood had this to say in response:

I think that’s a mistake. And, I think, sadly, that she would buckle under that kind of minority approach. Because it probably is. The nation spoke resoundingly to elect this President. For her to buckle under, to social media, again, she’s thinking that’s going to make an impact on her career. And it certainly won’t.

Greenwood has previously performed at inaugurals for Ronald Reagan, George H.W. Bush, and George W. Bush. Trump played “God Bless the USA” at some of his rallies last year.