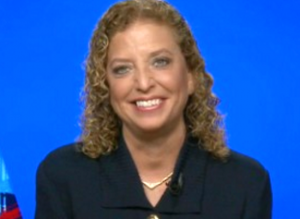 Outside of holding a presidential debate on Christmas or New Year’s Eve, the Saturday before Christmas is pretty much the most guaranteed time of the year to get as few people watching as possible.

Height of the Christmas party season? Check. NFL game featuring the first (New York) and fifth (Dallas) largest TV markets in the country? Check. Star Wars released this weekend? Check. Many folks traveling for the holiday? Check. CNN got 18 million for the fifth GOP debate on Tuesday night. ABC – which reaches more homes – won’t even get half that number. Which – as anyone conservative or liberal will tell you – is exactly how DNC Chair Debbie Wasserman Schultz wants it.

Speaking of DWS, she will be tonight’s undisputed elephant in the room: Not so much during the debate, of course, but during the pre-and post-debate coverage on the various cable news networks and social media. And we’re not talking about Republican pundits broaching the DNC Chair and her laundry list of woes, but those of the progressive variety. A Huffington Post headline today says it all: Fire Debbie Wasserman Schultz.

It’s increasingly clear that Debbie Wasserman Schultz, Chair of the Democratic National Committee, isn’t acting as a neutral party Chair, trying to insure a fair and democratic primary and building the Democratic Party in the states. Rather, she’s acting as a shill for Hillary Clinton, doing everything in her power to ensure that no one will effectively challenge Hillary’s coronation as the nominee.

Wasserman Schultz is committing political malpractice and should be removed.

Remember that Wasserman Schultz was National Co-Chair of Hillary’s 2008 Presidential campaign against Barack Obama and has been a loyal Clinonista. Her actions throughout the campaign have made it clear that she’s misusing her position as party chair to serve as a campaign operative for Clinton and not a representative of the entire party.

“I guess that the Sanders campaign unfortunately doesn’t have anything other than bluster at the moment that they can put out there, because what they are doing, what they have done, it’s like if you had, if you found the front door of the house unlocked, and someone decided to go into the house, and take things that didn’t belong to them, and then when they were caught, they still insisted on having access to the house.”

Just imagine, even for a moment, RNC Chairman Reince Preibus stating on national television the Cruz or Trump or Rubio campaign having nothing but bluster, then envision the nuclear reaction from any of those campaigns…and then proceed to the visual of all the declarations of a “party in chaos” in the press far and wide.

Got that one? Good…now back our regular column.

And it’s not just the Huffington Post calling for DWS’s outster, as MoveOn.org actually has a petition to have her removed (275,000+ signatures). Change.org’s petition has 31,000+ signatures, but that movement just started just under 24 hours ago. And the DNC’s latest FEC filings show the party has somehow lost $1.2 million in October alone and is now 2.2 million in debt.

Unpopular. Ineffective. In debt. That’s no way to go through life…

As for the debate itself, it will be interesting to see if moderators David Muir (his first) and Martha Raddatz (not her first) follow the narrative we’ve seen all week regarding those currently running second (Ted Cruz) and first (Donald Trump) on the GOP side. As in…will either Muir or Raddatz challenge Bernie Sanders directly on why he refuses to attack Hillary Clinton? After all, that was the question put to Ted Cruz and/or his spokesman regarding Donald Trump during Tuesday’s debate on CNN and on Fox News and MSNBC just before and following. Shouldn’t the same outrage on a lack of engagement be put to the Vermont Senator regarding his reluctance to challenge the party frontrunner? Just thinking out loud…

ABC gets the third and final debate of the year for the Democratic party. It’s chair is being called on to resign. One of its campaigns is at war with the party committee while under DNC investigation for allegedly inappropriately accessing files of a rival campaign.

Many say the GOP is fractured. Those many are correct. But after flying under the radar for months thanks to the circus that is the Republican race, Democrats – and especially its party chairwoman – are showing they know all about dysfunction and infighting, too.