Lena Dunham is Taking Off Her Clothes Again. This Time, She Disrobes from Pantsuit to Offend Us.
Opinion

Lena Dunham is Taking Off Her Clothes Again. This Time, She Disrobes from Pantsuit to Offend Us. 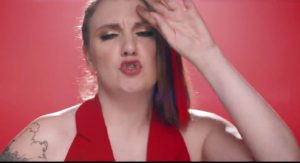 Actress Lena Dunham is taking off her clothes . . . again. This time, she disrobes from a pantsuit to offend us. In her Sensual Pantsuit Anthem, a profanity-laced, faux rap video homage to help elect Hillary Clinton, Dunham declares the election has made her “ill.”

So Lena decided to share her nausea with us voters by way of a video where she dressed up in a red pantsuit, and raps with some black homies as backup.

Lena tries to get down, screeching that Hillary’s the “strongest fucking person” who has had to defend everything she’s done her whole life “to the left and to the right.”

The black homies kick it in the background, as Lena does a lousy impression of a thug, throws down this rhyme about Hillary:

“She’s been a lawyer, first Lady, Senator, plus a mom, fights for justice, since of the age of 15. Man come on.”

Of course, Dunham doesn’t list any of Hillary’s accomplishments achieved while holding down all of her government jobs. In fact, Lena raps that because Hillary held all these government jobs in “a man’s world,” Hillary doesn’t have to tell “bitches” what her plan is. In fact, according to Lena, Hillary’s gender is the only qualification she needs to run for (and be) President of the United States.

“She worked harder than her man did, still saw her grandkid and people HAVE the NERVE TO ASK HER WHAT HER PLAN IS?”

“The plan is to win against hatred and slurs (code for Donald Trump).”

Then Lena gets jiggy wit it. She points her mic to viewers, declaring “I’M WITH HER,” as the same words simultaneously pop up on the screen. Then Cynthia, a black female singer, croons: “I can’t believe she’s in the race with this guy. Let’s get out and vote or everybody might die.”

So now Lena Dunham is telling Americans that if Donald Trump is elected president, he’ll kill us. Of course the same black female rapper warns viewers that Hillary’s treated unfairly by the media because she’s a woman. “And nothing new motherfucker, she’s Hillary.”

Maybe on a planet far, far away, Hillary’s treated unfairly, where there’s no liberal mainstream media — but not here on planet earth.

Of course Dunham ends her Hillary video by stripping down to a red bikini-like get-up. At least she didn’t subject us to full frontal nudity, as she does in every episode of the HBO show ‘Girls.’ Of course this video wasn’t as bad as her “Extinction of White Men” hate video, in which her father declares: “Well, white men are a problem. Straight white men are a big problem. That’s for sure.”

Imagine if Dunham had said black men are a problem, a big problem? No need for me to spell out the consequences, right? But in the twisted minds of liberals, it’s okay to hurl bigoted speech at white people. That’s acceptable racism. The big problem in this election are ‘celebrities’ like Dunham, who think anyone gives a crap what she thinks, says or does — with or without cursing…or clothing.