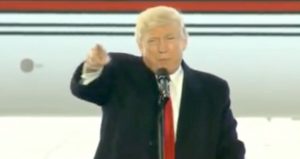 Throughout this week, NBC News’ Katy Tur has dealt with a lot of harassment from Donald Trump supporters. The GOP presidential nominee singled out Tur at a rally earlier in the week for being a dishonest reporter who won’t show the size of his rally crowds.

People took to Twitter to express sympathy and admiration for Tur in the wake of the harassment, creating the hashtag #ImWithTur. Tur spoke about the whole situation with MSNBC later in the night and then subsequently called out Trump for again making the false claim about the press not showing the crowds at another rally.

During today’s rally, Trump went on another “dishonest media” riff and, once again, Tur was singled out by some in the crowd for abuse. Local reporter Derek Myers sent out this tweet.

Trump says his usual "dishonest media" as he points to us. Crowd boos. Heard someone yell, "@KatyTurNBC is a whore."

Tur noticed this and retweeted it.

Tur did point out that at least one rallygoer did offer up some kind words to her today.

Lovely woman in front of the press pen turns around and yells "I love you!" as the crowd boos the press in Wilmington, OH

Watch the clip above of the rally, via Right Side Broadcasting.