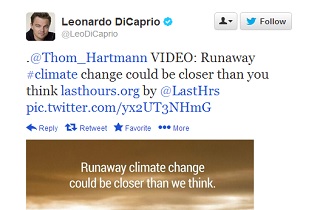 Progressive talk radio mainstay Thom Hartmann is sounding the mass extinction alarm as writer, narrator, and star of the short film Last Hours, which examines the global warming threat posed by, among other things, frozen methane gas beneath the oceans. On Wednesday, the film got a Titanic social media boost from acclaimed actor and longtime environmental activist Leonardo DiCaprio, who tweeted links for the film to his 7 million-plus Twitter followers.

The issue of climate change bubbles on the stove in the background of current politics, but has become the subject of increasing urgency among liberals like MSNBC’s Chris Hayes, who produced a climate change documentary of his own this summer. Last Hours aims to circumvent the mainstream media apathy and political paralysis around climate change, and take its (metaphorically) chilling case straight to the people of Earth. From the film’s press release:

Our planet has nearly died before. Five times in the deep geologic history of planet Earth, massive quantities of greenhouse gases have been released through the Earth’s crust.  One was provoked by a meteorite strike, others by tectonic and volcanic activity. In each case, these massive releases of greenhouse gases warmed the planet enough to cause global mass extinctions – the death of more than half of all life.

“Last Hours” is a film that explores the possibility that we could be close – centuries or perhaps just decades -to tipping points that could lead to a sixth mass extinction, and relies on input from some of the world’s leading scientists.

The boost from DiCaprio, whose father George DiCaprio is a co-producer on the film, should help Last Hours into the bloodstream of climate change activism, along with Hartmann’s book The Last Hours of Humanity, which explores the subject in greater depth.

The science behind Last Hours, particularly the potential for a catastrophic release of methane, hasn’t reached the unanimity of the overall scientific consensus on global warming, but the experts disputing it appear to be operating under old assumptions. The release of methane has also become a rallying point for opposition to fracking, because the gas has a 25 times greater greenhouse effect than carbon dioxide.

If you need an example of how our current political environment is dealing with this problem, look no further than the Carbon in Arctic Reservoirs Vulnerability Experiment (CARVE), whose principal investigator, Dr. Charles Miller, appears in Last Hours. If you want to learn more about the NASA project, you’re going to have to wait until the current government shutdown is over, because CARVE’s website is down until then.