Let’s Break Down This Aubrey O’Day Song ‘DJT’ To See If It’s About Her Affair With Don Jr. 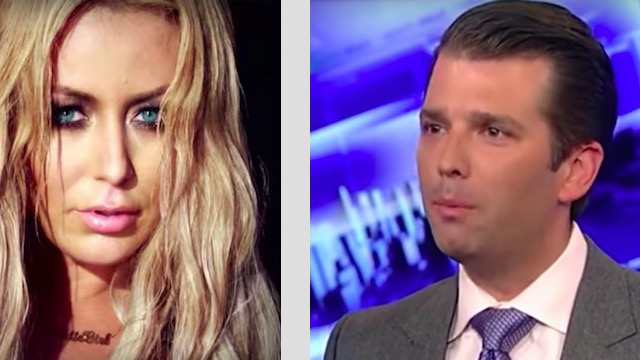 In the wake of Donald Trump Jr.‘s impending divorce from Vanessa Trump, the rumor mill has been wildly spinning about affairs the eldest Trump son may have had over the years.

As it turns out, one of them may have been recorded in song – well, it’s mostly a dramatized phone call with a techno-ish chorus cut in between, but let’s call it song.

The gossip rags — from Page Six to the Daily Mail — have already thrown their smut behind the thesis that Danity Kane’s Aubrey O’Day, whose star was born with P. Diddy’s MTV show Making the Band in 2005, wrote a song about Trump Jr. after the pair had an affair. What’s more, multiple sources confirmed the affair to Us Weekly in tantalizing detail.

The pair met in 2011 on the set of the 5th season of Celebrity Apprentice, in which O’Day was a contestant and Don Jr. an “adviser” to his father, the show’s host. “Things started up with Aubrey and Don Jr. toward the end of the taping,” one of US Weekly‘s sources said.

The romance between the two apparently got hot and heavy fast, and Don Jr. told O’Day that things were over between him and Vanessa. The two were allegedly together from the end of 2011 until March 2012, when Trump cut things off after Vanessa found email exchanges between the two.

O’Day’s only solo album, Between Two Evils, debuted in August of 2013, and may contain some clues as to the rumored affair between the pop singer and President Donald Trump’s adult son. Namely: The first song on the album is not-so-cryptically entitled “DJT”. The timing matches, and so do the initials, but what about the content?

And here are the lyrics. Aubrey’s lines are normal print, her Mystery Man’s lines are in italics, and annotations by us are in bold:

Whatever the truth is defines the reality of you and I forever
And I need to be able to define that before I can walk away
I thought it was forever at the time but maybe I was lying to myself
Is that what you want?
You want to believe that everything with me was a lie? A fantasy?
And you want to go back and live in the life that you had – have – forever? (Implies that there was an affair going on, given that there’s already a “life” in place for the man in the song to go back to.)
I don’t know, I couldn’t do what I said I would do
So that answered the question for me (According to a source for US Weekly who is close to O’Day, Don Jr. told Aubrey that he and his wife had separated and that it was over between them, so leaving Vanessa could be the “what I said I would do” in this line.)
I’ll always want you and always wonder about it
But it doesn’t matter because I have to stay here (Read: potentially with his wife and kids)
What made you stop believing in our world?
You know, I think probably the loss of the other world
I’m torn between two worlds both of which I wanted (The two worlds, ostensibly: A life with Aubrey, or a life with Vanessa and his kids.)

Tell me you love me, I need you to do that
No, you don’t
Yeah I do, I need to know it before I walk away
No, that’s exactly what’s stopping you from walking away
No it wouldn’t, that’s exactly what would help me walk away
You know everything anyway
You’re the only one who ever knew my heart
I have to move on, I need your help
I can’t believe that this was all a lie
You have to tell me you love me
I don’t ’cause you’re a fucking pain in my ass
Tell me you love me and I won’t talk to you anymore
I’ll leave you alone
Look, it doesn’t matter, it can’t matter
The truth will only kill us both (If it’s Don Jr., he can’t tell her he loves her because it would mean that his life with his wife and kids is a lie.)
You have to say it once to yourself and to me and then I’ll go
I love you
Talk to you later

To add fuel to the flame, O’Day tweeted on election night, according to Page Six, “my story I didn’t tell is worth millions now.” The tweet now appears to be deleted.

O’Day did not respond to Mediaite’s requests for comment.