Limbaugh: The Republican Party Is ‘Embarrassed’ Of Its Christian, Pro-Gun, Anti-Abortion Base
audio

Limbaugh: The Republican Party Is ‘Embarrassed’ Of Its Christian, Pro-Gun, Anti-Abortion Base 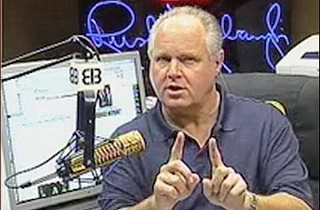 According to Rush Limbaugh, the wealthy elites who fund much of the Republican Party’s activities are embarrassed of the party’s pro-gun, anti-abortion Christian voting base.

“The Republican Party is embarrassed by its own base,” he declared before recalling the time he went to a Hamptons party and met with wealthy Republican donors, who asked him, “What are you going to do about the Christians?” According to Limbaugh, this anecdote is indicative of how the party elites snicker at their voting base.

“Abortion! They’re killing us! Pro-lifers are killing us and they listen to you!” Limbaugh claimed the man told him, “You have got to tell these people to back off on guns!”

“I’ve heard them say they get embarrassed to go to Republican conventions with pro-lifers also there,” Limbaugh added. “They accept the Democrat caricature of the Republican base: Southern, hayseed, hicks, pro-lifers, pickup truck-driving, gun rack in the back window people, chewing tobacco and going to church and talking about God all the time. But they really see them as a bunch of zealots when it comes to abortion.”

Limbaugh further explained that these wealthy Republican donors have wives who “nag them about” the pro-life crowd.

Ultimately, the radio host concluded, the Republican support for “amnesty” is a way to get rid of its base by replacing it with “a new group of people that would become their base if they just got rid of these… bitter clingers.”

Listen below, as clipped by Daily Rushbo: