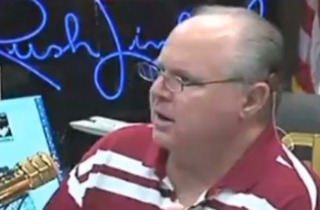 Rush Limbaugh performed a deep analysis on Donald Trump‘s performance at the Saturday night GOP debate, noting that much of the Republican frontrunner’s outbursts echoed “liberal Democrat lingo,” and could have been the result of “emotional incontinence.”

Specifically, Limbaugh observed that Trump had the audacity to criticize the Iraq War, and to mention the historical fact that 9/11 occurred under George W. Bush‘s presidency. Limbaugh said Trump was also guilty of “defending Planned Parenthood in language used by the left,” by which he meant that Trump defended the many vital health care services, which are not abortion, that Planned Parenthood provides. For all these lapses, Limbaugh accused Trump of “using the terminology of Democrats.”

Folks, there were a number of occasions where Donald Trump sounded like the Daily Kos blog, where Donald Trump sounded like the Democrat Underground, sounded like any average host on MSNBC. And I said to myself, “Now, wait a minute. What’s going on?” Trump is not — I don’t care what any of you think, he’s not stupid. He has political advisors. He has a lot of people who are conservatives who are there to tell him where the boundaries are, and he crossed those boundaries on Saturday.

I don’t know how many people in his circle knew where he was going Saturday night, if he was gonna go there and how far. But on a Republican debate stage, defending Planned Parenthood in language used by the left, going after George W. Bush and Jeb Bush and the entire Bush family, for the most part, using the terminology of Democrats, people think that Trump was out of control, that he had emotional incontinence that night. You like that term? Emotional incontinence. Lost control. Was out of control. Well, maybe, but I still think there was a strategy going into this.

Limbaugh tried to explain this away, by positing that Trump “strategically was making a move on independents and Democrats in South Carolina,” but also that the booing may have angered him to the point that he became “a victim of emotional incontinence.”