Lindsey Graham Says He Would Suggest Censoring The Mail, If He ‘Thought It Necessary’

Lindsey Graham Says He Would Suggest Censoring The Mail, If He ‘Thought It Necessary’ 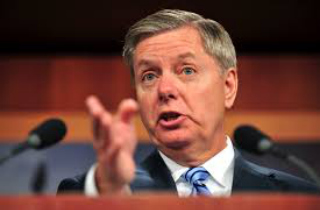 Yahoo’s Chris Moody reports that outspoken security hawk Sen. Lindsey Graham (R-SC) would propose censoring American postal mail if he thought it a “necessary” method to protecting the United States from future terror attacks. The senator compared the hypothetical situation to World War II, in which all Americans had a “mentality” that their way of life was “at risk,” and thus surveillance was necessary.

Speaking with reporters on Capitol Hill this afternoon, Graham made the comments while facing questions about the National Security Agency’s collecting of phone and email records of American citizens. He reportedly pointed to the World War II-era policy of screening outgoing postal mail as a means to “seeing what the enemy was up to.” According to Moody, Graham said the screening was “appropriate” back then and he would consider reinstating it today if he felt it necessary:

“In World War II, the mentality of the public was that our whole way of life was at risk, we’re all in. We censored the mail. When you wrote a letter overseas, it got censored. When a letter was written back from the battlefield to home, they looked at what was in the letter to make sure they were not tipping off the enemy. If I thought censoring the mail was necessary, I would suggest it, but I don’t think it is.”

While further discussing the implications the recent NSA revelations might have on terror policy and constitutional limits, Graham reportedly continued:

“The First Amendment right to speak is sacrosanct, but it has limits. In World War II, our population understood that what we say in letters could be used against [us by] our enemies. It was designed to protect us and ensure that we would have First Amendment rights because under the Japanese and Nazi regime, they weren’t that big into the First Amendment. We don’t need to censor the mail, but we do need to find out what the enemy’s up to.”