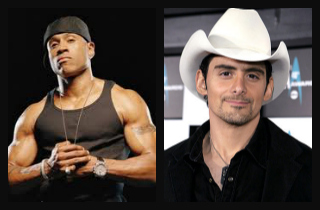 Old-school rap titan LL Cool J and country superstar Brad Paisley have teamed up to solve racism, which turns out to have all been an accident. In Accidental Racist, Paisley mopes about the (presumably black) Starbucks employee whom he may have offended by wearing a Confederate flag, while explaining that it was the only way he could show allegiance to the band Lynyrd Skynyrd, because there are no t-shirts that actually say “Lynyrd Skynyrd” on them, and don’t have confederate flags on them. LL swoops in, later, to offer a totally fair trade: he’ll forget all about slavery if Paisley will tolerate his gold chains.

Ordinarily, I wouldn’t slag two people whose hearts are in the right place, but at this point, I’m  mainly pissed off that Wonkette made me listen to a whole country song, and not a good country song like The Devil Went Down To Georgia, but one of those droning downbeat ones where every word has, like, five extra syllables to fill up the extra time in each measure. As such, Messrs. Paisley and Cool J must now feel my wrath. Here’s how the song starts (thanks to Wonkette for the transcription):

To the man that waited on me at the Starbucks down on Main, I hope you understand when I put on that t-shirt, the only thing I meant to say is I’m a Skynyrd fan.

Set aside, for the moment, that most present-day Starbucks employees, even if Brad explained his t-shirt, would be like “What the f**k is a skinnerd? Is that, like, a really enthusiastic dermatology student?”

Set aside the fact that there are ways to make one’s allegiance to a band more explicit, and less racist. For example, if I were a fan of the German Lynyrd Skynyrd (Wenn ich gehe morgen hier, Möchten Sie noch an mich erinnern?), I wouldn’t go around wearing an old-timey German flag.

But if I “accidentally” did, and felt bad about it, I would stop wearing that shirt!

Paisley goes on to explain the dilemma in the chorus:

‘Cause I’m a white man livin’ in the southland

Just like you I’m more than what you see

Our generation didn’t start this nation

And we’re still paying for the mistakes

That a bunch of folks made long before we came

And caught between southern pride and southern blame

Here’s a handy little solution to Brad’s vise-like conundrum: there’s already a flag for the place he’s from. True, a version of it once flew over a slave nation, but as LL points out, we stopped that, over the vociferous objections of people carrying the Skynyrd flag. But LL then pulls a “both sides do it”:

So when I see that white cowboy hat, I’m thinkin’ it’s not all good

I’d love to buy you a beer, conversate and clear the air

LL and Paisley then strike a deal by alternately singing and rapping the terms of a ceasefire:

LL: (If you don’t judge my gold chains)

Paisley: But not everything we’ve done

Paisley: It ain’t like you and me can re-write history

LL: (The relationship between the Mason-Dixon needs some fixin’)

Paisley: I hope you understand what this is all about

LL: (Quite frankly I’m a black Yankee but I’ve been thinkin’ about this lately)

As I said, I’m sure Paisley and LL meant well, and I’m sure that LL doesn’t purport to speak for all black people, but I’m going to go ahead and speak for all white people: No, it is not okay to wear the Confederate flag and claim you’re an “accidental” racist. Sorry (not really), but we already have a flag, and that one has inflicted more damage on this country than even Lynyrd Skynyrd could repair. As for the gold chains, that’s between LL and his chiropractor; I don’t think most black people sport enough bling to balm hundreds of years of oppression and murder. I hear some of them don’t wear any gold chains.

Update: The Youtube video has been removed, but the song is available on Spotify.