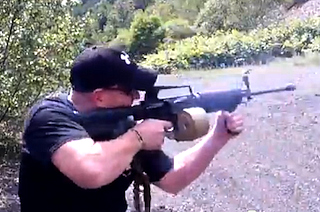 Gilberton, PA Police Chief Mark Kessler defended several of his YouTube videos that went viral this week, in which he fired off multiple automatic weapons in between calling Secretary of State John Kerry “traitor,” arguing against a U.N. arms treaty, and mock-apologizing to “libtards” whose feelings would be hurt by his language and weapons.

Kessler was apparently set off by an article about Kerry’s attempts to sign on to a U.N. peace treaty that many conservatives in Congress oppose.

“That piece of sh*t traitor,” Kessler yelled into a camera. “Who is he to decide what we can and can’t own? And f*ck the U.N. Who are they to decide what we, the American people, can own? I’ve got a message to Kerry, and to these c*cksuckers over in the U.N. Sign anything you want to sign. It’s not going to mean sh*t. You know what I have to say to you? Come and take it, motherf*ckers.”

In a second video, Kessler sarcastically acknowledged that he’d rubbed some viewers the wrong way.

“Please accept this as my sincere apology,” Kessler said, before firing an automatic weapon into the distance for a while. At one point Kessler grabbed another gun (he did not think to have them within reach when he began taping, thus leaving several intervals of dead air) and said, “I have another message for ya: go fuck yourself again!”

“I’m really hurting some feelings today,” he bragged. “All you f*cking libtards out there, all you f*cking crybabies, grow a pair of balls, and man the f*ck up, all right?”

Both videos were uploaded to YouTube on July 15. The original video garnered only 9,000 views, but its sequel is fast-approaching 43,000 pairs of eyeballs.

In an interview with the Pottsville Republican-Herald, Kessler affirmed his right to make the videos.

“I think the video is in support of the Constitution—the support of the First Amendment, the right to express your thoughts and words freely without reprisal from any government,” Kessler said. “That’s why I used the vocabulary I did. As for the firing of the guns, that is my Second Amendment right. I have the right to keep and bear arms regardless of what the government says that I don’t.”

Watch the videos below: