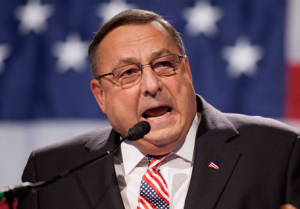 Maine Gov. Paul LePage made headlines recently when he criticized the Affordable Care Act — deeming the Internal Revenue Service the “new Gestapo.” The remark stemmed from the controversial individual mandate that requires Americans to buy health insurance or pay a fee. On Thursday, LePage apologized for the Holocaust comparison, while also reinforcing it.

LePage went on to say, “What I’m trying to say is that the Holocaust was a horrific crime against humanity and, frankly, I would never want to see that repeated.” He then added, “Maybe the IRS is not quite as bad. Yet.”

He had the following exchange with the reporter, Paul Heintz:

In the original comment, which landed LePage in hot water, he said:

This decision has made America less free. We the people have been told there is no choice. You must buy health insurance or pay the new Gestapo — the IRS.

This is the second time LePage has revisited that remark. The first time, he released the following statement:

It was not my intent to insult anyone, especially the Jewish Community, or minimize the fact that millions of people were murdered.

Clearly, what has happened is that the use of the word Gestapo has clouded my message. Obamacare is forcing the American people to buy health insurance or else pay a tax. Our health care system is moving toward one that rations care and negatively impact millions of Americans.

We no longer are a free people. With every step that Obamacare moves forward, our individual freedoms are being stripped away by the Federal Government. This should anger all Americans.

In the Seven Days interview, LePage said those “rations” are why he’s concerned the IRS is heading in a direction that will kill people. “Rationing. They ration health care in Canada and that’s why a lot of people in Canada come down to the U.S.,” he said.

“It took me about 15 minutes to get my jaw up off the floor. I was speechless,” Grant said after listening to LePage’s remarks. “We’re used to Gov. LePage spouting off with insensitive, offensive remarks. But what he said today, he’s basically put all his chips in the middle of the table on the side of totally unhinged conspiracy theories. I think we really have to question at this point whether he’s fit to hold office. It’s that serious.”

UPDATE: LePage issued a formal apology on Friday, per the Associated Press. He said it was “it was “never my intent to insult or to be hurtful to anyone, but rather express what can happen by overreaching government.” LePage went on to say:

“The acts of the Holocaust were nothing short of horrific. Millions of innocent people were murdered, and I apologize for my insensitivity to the word and the offense some took to my comparison of the IRS and the Gestapo,” the governor said.

Take a listen, via Seven Days: