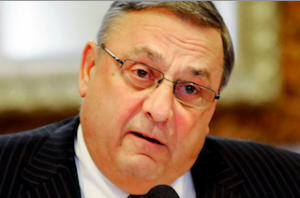 According to two unnamed Maine lawmakers, Gov. Paul LePage told a group of Republicans last week that President Obama “hates white people.” The Portland Press Herald’s Eric Russell reported the story Monday, writing that the two lawmakers, both Republicans “confirmed the comment” but “asked that their names be withheld for fear of political retribution.”

The context of LePage’s comment apparently concerned the president’s legacy, with the Republican governor saying Obama could have been a great president if he had emphasized his “biracial heritage.” The reason LePage gave for why Obama has not done is because he “hates white people.”

“Yeah, he said it,” one of the lawmakers to the Press Herald. “It was one little thing from a speech, but I think most people there thought it was totally inappropriate.” State Reps. Alex Willette and Larry Dunphy, who attended the event and did give their names, said that if the governor did make the comments, they didn’t hear it.

“It seems farfetched for anyone, even a newspaper, to make an insinuation the governor is racist given his life history,” LePage’s senior political adviser Brent Littlefield said in a statement denying the remarks.

And on Tuesday, LePage was confronted by reporters about the comments at the State House, claiming, “I never said that. You guys are all about gossip.”

The governor, who took office in 2011, has a history of making provocative remarks surrounding race on the record, such as the time he declined the NAACP’s invitation to attend a Dr. Martin Luther King, Jr. Day celebration, telling the organization to “kiss my butt.”

Watch LePage make those remarks to WCSH below: