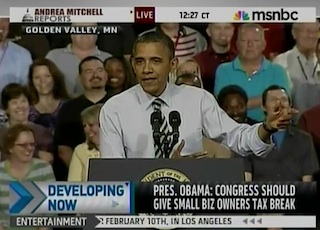 Hey, memo to the fine folks at Twitchy and Fox Nation; You do realize that there are actual things to mock President Obama for, right? That’s what I’d think. I mean, it’s literally your job to find these things and exploit them to their full potential. That’s what conservative blogs do. But, if that’s the case, it must be a really crappy day at your offices because, on both sites, the lead story is that Obama did a speech and said a word. Accurately.

Here, for a test, I’m going to show my readers this video of the President giving a speech in Minnesota and see if they can find the part worth making fun of:

Does anyone see it? Not yet? Look closer.

The thing that conservatives are mocking is that he used the word “thingamajig.”

See that media folks? See that, Twitchy? See that, Fox Nation? Maybe I’m crazy, but no one over here really gets this issue.

I mean, what exactly is the problem with Obama saying “thingamajig”? It’s not he used it wrong. And it’s not like the audience didn’t like it. And obviously, no fan of the Republican Party, the Party that gets multi-millionaires to pretend to like NASCAR, could ever mock anyone else for being “folksy.” So what are you complaining about?

Look, guys, I get it. It’s not fair. You want a big, silly Obama gaffe to make fun of. Us libs get to have a field day over “Amercia” and you guys are stuck with “Polish death camps.” So much less fun. And I know you guys must be so bummed about how boring Obama scandals are. There’ll all about stats and figures and Solynda stories so dull the telling of them puts the most ardent Tea Partier to sleep.

So, let “thingamajig” be. Why don’t you all go back to talking about “57 states” for a while. That was really funny. It really was. I’m sure something good will come your way soon. Just hang in there, kiddos!