Is The Daily Caller Releasing Private Palin Tweets Different Than The JournoList Emails? 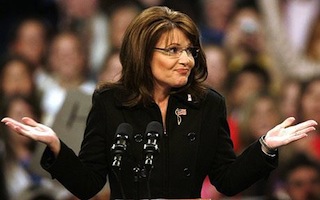 Late last night, Jonathan Strong of the Daily Caller posted Twitter direct messages (private tweets sent from one Twitter account to another) written by Rebecca Mansour, a top aide to Sarah Palin, and they are…not that exciting. Did you know that Palin was angry about Joe McGinniss? That she and her team weren’t thrilled about Bristol Palin maybe marrying Levi Johnston? Shocking right! Add in some less-than-polite phrasing and you basically have an idea of what the scandalous material contains. Unsurprisingly, many on the right are attacking the Daily Caller for posting messages. However, does their righteous indignation lose a bit of its luster when you realize that some of these very same people lauded DC and Strong for posting the private Journolist emails just a few months ago?

Once again, I’m not defending the newsworthiness of the DC piece. There’s really no there there and the revelation by Politico’s Ben Smith that the leaker had been shopping the messages around for a while (accompanied by sleazy-sounding correspondence) makes the whole thing feel even lamer. However, it’s seeing commentators bend over backwards to be offended by the same kind of think they were defending that’s most obnoxious. Take for example this headline from the PJ Tattler blog on Pajamas Media:

They don’t? Oh, I suppose private emails are entirely different. That would explain why that same website would publish an interview with Strong (again, the guy who wrote both pieces!) entitled “Jonathan Strong Cracks Open the JournoList” and saying that he’s “done much to bring the JournoList to light in the past two weeks.”

Of course, those two pieces were written by different people and it’s possible that there can be differing opinions from those that work under the same roof, right? So, instead, how about Dan Riehl writing the charming column “Breaking: Tucker Carlson To Give Head On Pennsylvania Avenue” when, just last summer, he was eagerly joining in the fray to demonize those on the left-leaning email list.

In that most recent Riehl piece (the “giving head” one), Riehl links to Conservative blog Ace of Spades HQ where…well, you get it.

“I’m not going to link the traffic-whoring effort.

It’s cheap. Do people at the Daily Caller talk smack online? I don’t know any of them but of course they do. So does everyone.”

And Ace of Spades last year:

Looks like we got our first “reporter”! Not just an opinion writer at a liberal magazine; a reporter at Bloomberg”

Oh, but don’t worry, Liberals! The sword of hypocrisy cuts both ways!

If you head over to the Huffington Post, Jason Linkins does admit that the Palin tweets are that interesting. He still repeats the most provocative ones anyway while musing that ” we’re probably hearing the inside dope.” He seemed much more against publishing uninteresting gossip when he wrote the full-throated defense “JournoList Flap: A Ton Of Indictments In Search Of A Crime” last July.

It’s just further proof that the most popular tactic in politics (either governing or reporting) these days is feigned outrage. Everyone’s values are interchangeable, flipping completely depending on whose name is in the headline. If it’s your team in the cross hairs, then something is no big deal and passed over. If it’s the other guy, well, then suddenly everyone has been replaced with a delicate southern belle, offended by everything and suffering from a bad case of the vapors. Just take a look at the rampant hypocrisy from a couple weeks ago when the right was aghast at Michelle Obama inviting over “gangsters” and “racists” when no one seemed to care about questionable conservative musicians.

There’s nothing wrong with being outrages. When someone you disagree with does something that offends you, say it. But I can’t be the only one who’s getting pretty outraged at people from both sides of the aisle constantly pretending to be outraged when the circumstances are in their favor.