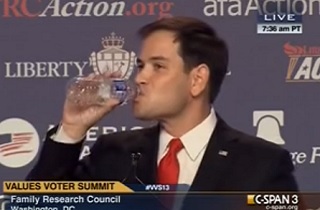 There was some good news for LGBT rights advocates and women at Friday morning’s Values Voter Summit, which is apparently not an extreme couponing political workshop. Former 2016 Republican presidential front-runner Sen. Marco Rubio included an extensive passage about “social issues” in his speech, lamenting the “intolerance” of others on “issue after issue,” but in a sign of the shifting GOP electoral landscape, declined to name a single one of those issues.

Rubio, who has faded faster in GOP polls than a pair of Wranglers in a pool of bleach, can’t afford to alienate any voters at this point, so while he needed to pay lip service to the Values Voter Summit crowd, Rubio scrupulously avoided giving cable news an anti-gay, anti-reproductive rights sound bite. While he didn’t specifically reference marriage equality or access to contraception, he used the unmistakable descriptors of the right’s persecution complex on those issues.

Sen. Rubio began by insisting that “Our leaders have to stop ignoring the impact that culture is having on our nation,” and added that “some say that this is nothing more than an effort to impose mine, or your, or anybody’s religious values on others.”

Those are the accusations leveled at opponents of marriage equality, and supporters of a non-religious employer’s right to deny contraceptive coverage to female employees, which the right sees as important religious freedom issues.

“I’ve also been lectured, as many of you have, that we need to stop talking about social issues if we want to win elections, but if we’re serious about saving the American dream, we can’t stop talking about these issues,” Cruz went on to say, while refusing to actually name any of those issues. Instead, he posited a “rising tide of intolerance in America, intolerance towards those who cherish these values.”

That’s the commonly used conservative complaint for people who refuse to tolerate bigotry and discrimination, but rather than explicitly defend those positions (Rubio supports a constitutional ban on same-sex marriage, opposes gay adoptions, and wrote a law to allow any employer to deny contraceptive coverage to female employees), Rubio relied on the vague euphemism “traditional values,” which he characterized as “hard work, responsibility, self control, the belief that life does not revolve around us.”

“This is not about imposing our religion on anyone, in America you have the right to worship any way you choose,” he continued, apparently endorsing human sacrifice and ritualistic double-parking.

The crowd liked what it heard, but it’s what they didn’t hear that is encouraging. Yes, Rubio may still hold these views, which is bad news for him, but the good news is that even in Republican politics, these views are becoming too toxic to actually say out loud. Rubio knows he needs to rub the nipples of the “Values Voters,” but by 2016, he might also need some help from the gays and the sluts.