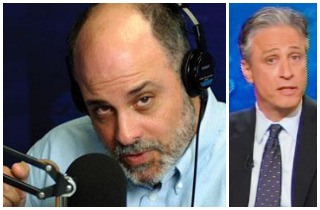 Conservative radio host Mark Levin went on a rant today against Jon Stewart over a bit he did Monday night over the current crisis in Israel, a bit that really offended Levin and led him to call Stewart a “knee-jerk idiot” (as well as questioning Stewart changing his last name).

He sarcastically praised Stewart and said, “You oughta hear this guy’s jokes about the Holocaust, he’s very funny!”

Levin did make two asides in his rant to take a bit of a cheap shot at Stewart over the fact that his original last name was Liebowitz. Levin cried, “I don’t trust Jews who change their names!” and asked, “Why did he change his name? I’ve asked this for many years. Why?” (The Daily Show somewhat indirectly addressed this issue when Donald Trump trolled Stewart about it last year.)

You can listen to Levin’s comments here, via The Mark Levin Show:

And you can watch the Daily Show segment in question here (Israel comes in at around the 4:45 mark), via Comedy Central: