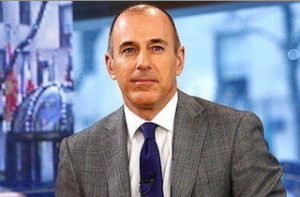 Despite a performance that was widely ridiculed by fans, pundits, and reportedly even his own network’s brass at last week’s Commander-in-Chief forum, Matt Lauer was able to bounce back immediately and score another high-profile interview assignment.

Lauer was tapped for a rare one-on-one sitdown with NFL Commissioner Roger Goodell. Several portions of the conversation have aired so far on various NBC platforms, with the full interview slated to air Wednesday on the Today show.

One excerpt, which aired during Sunday night’s broadcast of the Patriots-Cardinals game on NBC, offers reasons for concern about how Lauer will perform. In a 90 second exchange about concussions in the NFL, Lauer allowed Goodell to boast about the NFL’s new concussion protocol, which the commissioner claims to be more strict. But Lauer failed to follow-up with a question about why Carolina Panthers quarterback Cam Newton was allowed to keep playing following multiple vicious hits to the head in Thursday night’s NFL season opener — this despite the fact that the interview was taped on Friday morning.

Fans and critics seem to have little confidence in Lauer’s ability to press the NFL commissioner and get meaningful answers.

Lauer: “Do you have the best interests of the game at heart?”

Lauer: “I see no reason for further inquiry.”

“Roger, what is the precise moment you decided to transition from being Goodell to Bestdell?”

After being handed the wrong stack of index cards, Matt Lauer asks Roger Goodell about Tips For Cooking Light This Fall for 30 minutes.

NBC wants to show us they are Very Serious about this interview with Goodell, so they had Matt Lauer do it. #Oops

“After last week’s performance with Trump, Lauer is the PERFECT choice to grill Goodell” – NFL PR

Can’t wait for Matt Lauer’s interview of Roger Goodell. Goodell will face some tough questions on his favorite restaurants in Atlanta.

Laurer: “Isn’t Deflategate just you lording over the players?
Goodell: “Seen how great our 9/11 celebrations were?”
Lauer: “Lets move on”

How the hell does Matt Lauer not ask Goodell about Cam Newton in front of SNF audience? “Today” show? Jesus.

Goodell has been very selective in granting one-on-one sitdowns. ESPN senior writer Don Van Natta Jr., who’s done a number of hard-hitting pieces about various NFL-related subjects over the years, noted on Twitter that he’s been trying to speak to Goodell since 2012, and has been repeatedly rejected. But the commissioner participated in the sitdown with Lauer just two days after the Today host was widely criticized for going soft on Donald Trump.