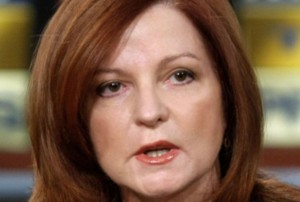 In an op-ed for The New York Times called “Trump Does It His Way,” Maureen Dowd really let Donald Trump have it, but merely by detailing a conversation they had. In essence, he sort of let himself have it.

She got the opportunity to talk to Trump recently. She chose to open the conversation by letting him know that his recent attack on Heidi Trump had lost him her sister’s vote. Trump responded by admitting, for once, he actually made a mistake:

“Yeah, it was a mistake,” he said, sounding a bit chastened. “If I had to do it again, I wouldn’t have sent it.”

She continued to press him on topics that related to women. She brought up his recent remarks on “punishment” for women who would seek out an abortion if it were illegal and his flip-flops on the issue, too. And there was kind of an amazing moment when Trump just outright tried to change the subject when asked a pretty big abortion question:

Given his draconian comment, sending women back to back alleys, I had to ask: When he was a swinging bachelor in Manhattan, was he ever involved with anyone who had an abortion?

“Such an interesting question,” he said. “So what’s your next question?”

She brought up his poor poll numbers among women, and got him to admit that maybe Corey Lewandowski should have probably apologized to Michelle Fields.

Interestingly, her subtle characterization of him in the interview said a lot. She wrote that he “murmured” an answer. She described some of the things he said as having a tone of self-deprecation. She called him subdued. In the seemingly endless profiles and thinkpieces inspired by Trump, this one stands relatively alone in creating a human character free of bombast or scorn, all thanks to the deliberate word choices of Dowd, who ended the piece by calling on Trump to finally act presidential.