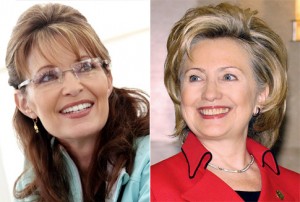 The time was eight years ago. The scene: An Alaska consignment shop. Reporters far and wide ran to the Land of the Midnight Sun to do what reporters do: Go straight to the source, get the facts. This was a huge story, one of national importance, after all…

CBS News Headline: Just one week before the 2008 election:

“So how long has Governor Palin shopped at your store?”

“What does she usually buy at your store?”

“And does she also shop for her entire family there?”

“What is the price range of your women’s wear?”

“And how much does Governor Palin typically spend at your store?”

“And would you say your clothes look much different than what we’ve been seeing her wear on the campaign trail?”

The print and online headlines at the time weren’t too different:

After a $150,000 Makeover, Sarah Palin Has an Image Problem (Washington Post)

In addition to CBS, the broadcast and cable news networks were all over the story, as in MH-370 all-over-it. The Welfare Queen from Wasilla was going to be portrayed as a hypocrite come hell or high water… as just another rich Republican out-of-touch with the common folk. And by and large thanks to an avalanche of coverage, the portrayal stuck.

Fast forward to 2016: Another historic female candidate is making her pitch on the campaign trail around shrinking the gap of income inequality… which has grown four times faster under the president she’s served in Obama than the previous one in Bush. But while making said pitch in April of this year, the candidate decided it was a good idea to wear an Armani jacket that is the same price as a new car (the underrated Nissan Versa, which — like the Armani jacket — prices out at more than $12,000.00). It’s the ultimate hypocrisy, of course, for Hillary Clinton — the same Hillary who earned more in one speech to Goldman Sachs than her Democratic rival in Bernie Sanders has in an entire year — and therefore worthy of the same attention and resources the GOP’s Vice Presidential candidate generated in 2008.

Will Julie Chen be sent to an Armani store in Chappaqua to see what else Mrs. Clinton purchased there?

And where are those hysterical headlines from Vanity Fair, Politico and The New York Times?

Being a media columnist for a media site, we obviously explore bias in this space. But bias isn’t always about what is reported, but what isn’t. It’s called bias by omission, and it’s as fully on display as that jacket was on Mrs. Clinton two months ago.

CNBC — a financial network — exclusively revealed the cost of the jacket two days ago on Monday. Funny how barely any major outlets in traditional media have followed since. And look: Whatever Mrs. Clinton wears and how she spends her money is her business. She and her husband have earned well over $100 million since leave the White House dead broke 15 years ago and shouldn’t hide the fact they have expensive taste. The same rule should have applied to Mitt Romney when he was running four years ago, but again we had breathless stories around homes with garage elevators he was building and how that made him the real-life version of the greedy Gordon Gekko. It’s not the alleged crime of being out-of-touch… it’s the party affiliation that matters.

As sure as you were born, Hillary will get a pass here. Because when you’re Wall Street’s golden girl and you’ve been paid over $625,000 for speeches to Goldman, only Armani jackets will suffice when running with that crowd… even when claiming you’re running against them.

All while the media — like a traffic cop in front of an accident scene — says “nothing to see here. Please move along.”

And you can bet they will.