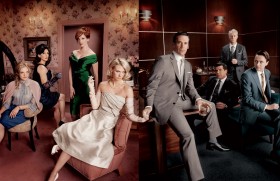 Yesterday I watched the season three premiere of Mad Men. At this point, it’s hard to imagine anyone not being aware that the show will be debuting its third season tonight on AMC. In an advertising bonanza that would flatten anything Don Draper might have imagined, the show has managed to permeate the public consciousness (despite the fact — based on ratings — it seems very few people have actually watched it). Between Banana Republic, Sesame Street, Twitter, and Frank Rich the show has officially become a cultural phenomenon (something that often precedes a jump the shark moment, but let’s hope that between Matthew Weiner‘s strong writing and the huge time lapses between seasons, that moment won’t arrive for a while yet).

In today’s NYT column, Frank Rich speculates that the reason we are all obsessed with the show is that in many ways it mirrors the tone of our lives today:

What makes the show powerful is not nostalgia for an America that few want to bring back — where women were most valued as sex objects or subservient housewives, where blacks were, at best, second-class citizens, and where the hedonistic guzzling of gas and gin went unquestioned. Rather, it’s our identification with an America that, for all its serious differences with our own, shares our growing anxiety about the prospect of cataclysmic change. Mad Men is about the dawn of a new era, and we, too, are at such a dawn. And we are uncertain and worried about what comes next.

It is certainly true that less than seven months after January’s triumphant inauguration this country suddenly finds itself currently mired in anxiety, anger, and near-violence. That said, will the same be true for the characters in the series? Season two ended during the midst of the Cuban Missile Crisis. Don Draper, having supposedly faced his demons out whilst m.i.a. on the west coast, is reunited with a newly-pregnant Betty, and Peggy, having triumphed over workplace sexism, has landed her own corner office. The season three opener (widely revealed to take place in 1963) certainly appears to suggest, however, that the more things change the more they stay the same (with one major exception, which I obviously won’t be telling you about).

So: What to tell you about the premiere? No details, that’s for sure! (I hate spoilers.) But here are two things to perhaps keep in mind, especially if you are new to the Mad Men fan club and have crammed all the previous episodes into a few weeks of viewing (and therefore haven’t had to suffer any sort of wait to find out, say, the repercussions of Peggy’s pregnancy, or who the woman is that Draper calls while on the fly in Palm Springs). My main takeaway is that Matthew Weiner does not like resolution. Or the sort of immediate resolution TV viewers have come to expect from regular September season premieres. Be prepared to be patient (and cope with a sort of viewer anxiety, I suppose). This, of course, is nothing new – devoted viewers may recall that we were a few episodes into Season two before all the story lines left dangling at the end of season one had a chance to work themselves out. It appears that trend will continue this season as viewers are dropped into the lives of these characters already in progress.

As for the rising water we’ve seen in all those advertisements? The opener only hints at its meaning. One of my favorite scenes from last season comes at the end of the second-to-last episode “Moutain King,’ which closes with Don Draper walking into the Pacific ocean in a sort of metaphoric baptism, only to emerge in the finale a changed and repentant man. Or is he? After two seasons of Mad Men even the casual fan probably knows better than to think plotlines or people are that simple (whether or not Betty has come to a similar conclusion remains to be seen). Draper hints at this lack of reinvention, himself, in a line partway through this first episode episode, which struck me as thematic (I will add it to the post later; I am serious about spoilers). Needless to say, for a show filled with such flawed and complicated characters, it’s safe to assume nothing will be tied up so easily. Or at all. It is this very refusal to resolve things neatly that, despite all its glamor and decadence, is the aspect of the show which most accurately mirrors real life.

In the meantime, while you wait for the 10pm hour, here is a video mashup set to Don Draper reciting parts of Frank O’Hara’s poem Mayakovsky from the collection Meditations in an Emergency (a copy of which pops up at the beginning and end of season two). It’s also a title that could aptly describe this show, which follows closely the smaller personal emergencies of its characters against the backdrop a country on the brink of larger catastrophe.