Opinion
I AM PRESIDENT

Last Wednesday, an exclusive sale on the t-shirt website TeeFury came to a close. The chosen design, dubbed “I Am President” by Australian artist Nathan Davis, featured a mashup of Republican presidential candidate Donald Trump‘s “Make America Great Again” campaign slogan and the Guardians of the Galaxy character Groot. 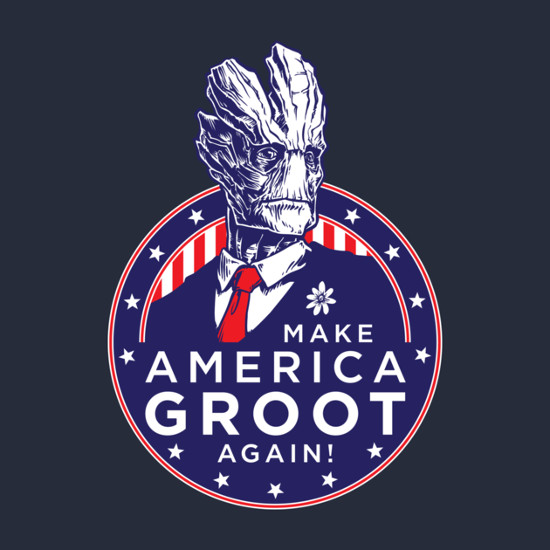 The design subsequently became available on additional t-shirt websites, and was popular among political reporters and bloggers on social media.

Davis splits his time between his home down under and the United States — hence his recent focus on mashing up geek properties with more overtly political themes. To get the bottom of the talking tree’s potential presidential bid, which initially began back in September, Mediaite got in touch with the Australian designer to pick his brain about his design work and the 2016 election cycle.

How long have you been working as a graphic designer?

I’ve had various art-related roles, mixed with a smattering of soul-crushing customer service jobs, since I first dropped out of university to work on magazine layout in 2004. T-shirt design has been my main source of income for almost four years.

Was it always your dream to work as a designer, or was it something you fell into?

Both. I’ve been drawing since I can remember, but lacked the self confidence to find a way to make it work. I designed a few shirts while working a contract job that eventually came to an end. At the time, I made shirts about Caffeine Powers Activate and The Black Knight Rises that did well enough that I could put off looking for another job. Now I design shirts full time.

Are you a big fan of Guardians of the Galaxy, or was “Groot” close enough to “Great” for your “I Am President” t-shirt design?

I loved the film, and got a nice kick out of writer/director James Gunn sharing my art. Plus, I’m a sucker for terrible wordplay. So the shirt was initially born out of just seeing Trump’s blatantly “borrowed” slogan and wanting to mess with it. Groot was appropriately silly and a nice contrast to Trump. He’s environmentally-minded, he works with a diverse group of people, and is made of actual bark (instead of looking like an old, orange tree).

Who’s your favorite character in the GOTG roster? Why?

Still making my way through the comics, but of the movie, Groot stands out. He’s deceptively simple, in a way that can be mistaken for a lack of intelligence. It’s purposely exacerbated by having a three-word vocabulary, and I like when the “simple doesn’t equal dumb” idea is used well.

You’re originally from Australia, and you’re splitting your time between Oz and the United States. How knowledgeable (or not) are you of American politics?

I’m an Australian, and am currently going back and forth between the Land of the Free and the Land of Free Spiders. At the moment, I probably know more about things here in the U.S. than back home. I initially picked up an interest in American politics through John Stewart‘s The Daily Show and Steven Colbert‘s The Colbert Report. I’m sorry, but the way you do things here is hilariously absurd a lot of the time.

America has a large influence, and sometimes I think American voters need to realise the rest of the world is watching. Not to judge, but because the U.S. remains very powerful, and your decisions will affect the rest of us. We were lucky in avoiding the brunt of the 2008 crash, but when America goes to war, Australian troops are always there to help. We do want to help, but we’ve had too many needless conflict during the past 15 years.

What about Trump scares you the most?

That people take him seriously. He’s loud and brash, and people actually mistake this for strength and intelligence. I doubt he graduated from Velcro shoes.

What about Trump makes you laugh the most?

You remember his announcement? He slowly rode down an escalator in a building with his name plastered on it in giant letters. As if he came down from heaven to an audience partially paid to be there to reveal a golden truth about Mexico. The whole event should tell us something important about the current political climate, but I was too busy laughing to realize he was serious.

Are there any other American presidential candidates, in either major party, that you’d love to incorporate into a design?

Pyramid Power Carson? Firebending Bernie Sanders? There are many quotable moments and silly takes on slogans, but I also try and think about what we’ll still find funny enough to wear a year or two from now. But sometimes an idea just won’t go away until it’s scribbled out. I try to keep my politics out of my work, but some things are just too silly to ignore. Kanye West 2020? If we’re not laughing, we’re crying.

Do you watch Saturday Night Live? If so, what’d you think of Trump’s hosting gig this weekend?

He is? Sweet merciful fudge, why?

Play “f*ck-marry-kill” with the first three American politicians that come to mind. No cheating.

Tough one. F*ck: Paul Ryan. He’s young, takes charge and promises big changes, but he’s not going to last long. So perhaps a night is all we’d need together. Marry: Bernie Sanders. He’s promising long-term care and livable wages, among many other stable things a committed partner would want. Kill? You risk making a politician a martyr, or striking them down so they become more powerful than anyone could possibly imagine. So I’ll skip Trump and help Mitch McConnell out. He looks so tired.