Meghan McCain Defends O’Donnell ‘Nutjob’ Remark To Rachel Maddow: ‘I Do Not Lie’ 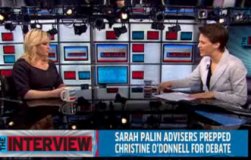 Meghan McCain went on Rachel Maddow last night to, er, discuss her ‘nutjob’ remarks about Christine O’Donnell on This Week. And to further respond to certain elements of the conservative blogosphere that defined her as a “self-indulgent set of mega-breasts.” Said McCain:

I’m over when women say anything in any kind of public forum. It automatically go back to what I look like and how much i weigh. I don’t know at which point, it no longer bothers me but I worry about young women. I have a lot of young women followers, teenagers. I worry about little girls reading my column and reading this stuff and what it does for them. It means don’t speak out because God for bid my weight is criticized. Again, this is like so old.

Maddow thinks it demonstrates a high level of hypocrisy considering how many times the right has called foul over ‘sexist’ attacks on Sarah Palin, but somehow McCain is free game. McCain concurred:

The irony as well, you cannot say sexist comments about Sarah Palin and Christine O’Donnell, but me you can say it all day long. I think it is men. A lot of men on the Internet with a lot of time and they’re sitting around talking about my body and it is really pathetic. Again, if I couldn’t handle it, I wouldn’t do it. It’s been happening literally since junior high so I don’t care anymore.

As for the root of her remarks about O’Donnell, McCain said she’d done a lot of research before appearing on the ‘prestigious” This Week and that O’Donnell doesn’t possess the qualifications to be a principal let alone a Senator: “The difference between me and everybody else, is I am saying what everybody backstage is saying and I have the balls to come on television…I do not lie. And this is how I feel about this woman.” Watch below. Maybe Meghan McCain should start her own ‘independent’ Tea Party using the talking points of what people are ‘saying backstage.’