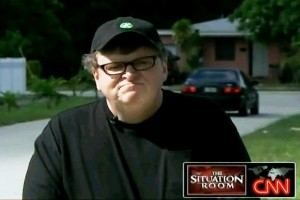 On September 11th, Michael Moore posted an article on his blog entitled “If the ‘Mosque’ Isn’t Built, This Is No Longer America.” It began with his assertion that he was opposed to the building of the Islamic community center two blocks from Ground Zero because he actually wants it built on Ground Zero. This is, of course, a totally reasonable thing to say…if you’re intending to cause a whole bunch of controversy and get a lot of press. Sure, enough, Moore appeared on CNN today to explain his position to Wolf Blitzer.

The interesting thing about Moore is that, in both his original post and the CNN appearance, he makes some good points. However, he wraps them all up with the ridiculous notion about building the community center on Ground Zero. Most likely, even he doesn’t really believe that. But, hey, if he didn’t follow every three rational arguments up with something completely nut ball, then he probably wouldn’t be famous and on TV, right?

When Blitzer asks him what he’d say to family members of the deceased who don’t want the mosque, Moore has a good response. He says that if a family member of his was murdered by someone, he’d love to be on the jury at the trial, but we have rules against that in this country for a reason. Then a few minutes later, through poor phrasing, Moore sounds like he’s arrogantly mocking Americans that haven’t travelled around the world. So it goes.

Moore preaches to the choir because he makes sure to say things that force everyone else not to listen. And folks on the right call him anti-American and that just keeps his profile up and the cycle continues. And if he actually makes some good arguments, it doesn’t matter because only those that already worship will hear it. And the exact same thing is happening with some other guy on conservative talk radio.

Watch the CNN clip below. Chances are it won’t make you feel anything about Moore that you didn’t already feel. If you want, though, try to read his blog post and pretend it was written by someone (anyone) else. Just make sure you skip that totally insane junk at the beginning.