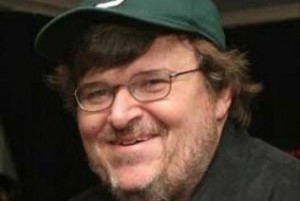 It was revealed on Sunday that Clinton’s early departure from the 9/11 memorial was due to the effects of pneumonia. As critics piled on Clinton after staffers escorted her away, Moore took to Twitter to show some compassion.

All u have to do is read the hateful comments about Hillary’s health incident today & then ask yourself, whose America do u want to live in?

Feel so sorry for Hillary. Watch the video of her at van. Hardly any1 helping her. Just 1 woman on her arm at 1st. Men just standing around.

Even so, Moore also voiced disapproval with Clinton’s staff for trying to hide her illness. He also seemed concerned that the move will only give #HillarysHealth conspiracy theorists ammo to use against her:

No husband, no Huma, SS looking like keystone cops & pathetic campaign hacks more concerned about blocking view of cameras than helping her.

Still, Moore was sympathetic as he urged Clinton to recuperate:

Hillary: U need to REST. Take the wk off. Take 2. Let the rest of us pull the weight. Every1 can do a little. Who’s w/ me? Tweet #IWorkHRest

As the news continues to develop, Clinton has cancelled several campaign appearances in California, and her spokespeople have acknowledged that they didn’t handle the episode very well.