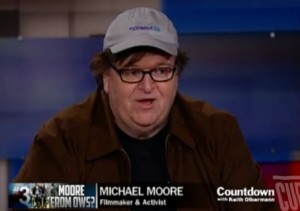 A few weeks ago, I reported that Michael Moore had gone completely off the deep end in his escalating campaign of anti-Obama wingnuttery, making the fact-free claim that President Obama (whom he endearingly calls “O”) had “greenlit” a nationwide crackdown on Occupy Wall Street encampments. Despite widespread ridicule of this delusion, Moore renewed the accusation early this morning, this time in response to evictions at the Philadelphia and Los Angeles camps.

What I found remarkable about my last report on this subject is that hardly any right-wing blogs picked up on it, despite the fact that it clearly made a prominent liberal look like an utter moron. Based on nothing whatsoever, Moore accused the President of ordering a nationwide crackdown of Occupy protests, tweeting his followers, “Dozens of Occupys across US raided this weekend-& now NYC- Planned & coordinated by the Dept. of Homeland Security? Did O give green light?”

He then went on Countdown with Keith Olbermann, where they rapturously shared the delusion like a couple of tone-deaf American Idol wannabes. What righty blogger wouldn’t want to point and laugh at that?

The answer, of course, is that Moore’s delusion has the dual benefit of attacking Barack Obama, and of distracting people from serious issues surrounding the Occupy protests, like the casual use of “less than lethal” force on peaceful protesters. At best, Moore is wasting a lot of people’s time with this. At worst, he’s feeding dangerous delusions.

At about 3 o’clock this morning, Moore renewed the attack, tweeting this to his followers:

This double tap of OccupyLA & OccupyPhilly by our new militarized police force I’M SURE has NOT been coordinated by anyone in DC. No way!

This is the kind of logic-proof statement that makes people ignore everything you say, and frankly, marginalizes the people Moore is supposed to be lending his support to. There are already plenty of other people eager to fill that job.

The idea of a federal crackdown on the Occupy protests has created a minor schism among liberals, with the sane ones pointing and laughing at the likes of Moore and Naomi Wolf.

I have no problem with people questioning authority, or being skeptical of the “official story,” but you can’t just replace the official story with whatever you can pull out of your ass.

Paranoia is common at either extreme of the political spectrum, so it’s not surprising that Michael Moore has an audience for this insanity. What is surprising is that, in a movement of supposedly free thinkers, few have risen to call him out on it.