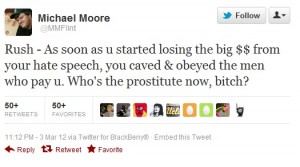 Some folks just don’t get it. Conservative radio giant Rush Limbaugh is in ever-deepening doo-doo over his verbal assault on Georgetown student and activist Sandra Fluke, despite what appears to be a forced non-apology. In his zeal to celebrate Limbaugh’s predicament at having denigrated women with a reprehensible gender-based slur, liberal filmmaking giant Michael Moore…hit Limbaugh with a reprehensible gender-based slur, tweeting “Rush – As soon as u started losing the big $$ from your hate speech, you caved & obeyed the men who pay u. Who’s the prostitute now, bitch?”

What’s incomprehensible to me is how anyone could choose to criticize Limbaugh by creating a similarly hostile atmosphere. Michael Moore, whose concern  for women seems to depend on the political points to be scored, hammered Limbaugh with a Twitter barrage that he was so proud of, he posted it on his website with the weird third-person headline “Michael Moore Tweets About Rush Limbaugh’s ‘Apology’ to Sandra Fluke.”

I guess Romney knew that Rush, who made the mistake of saying what most Republicans think (women as sluts), had cost him the Nov. election.

Or after losing 6 sponsors yesterday Rush decided he loved $ more than he loved calling women prostitutes. Musta been a tough call, eh Rush?

Some sponsors don’t care how much Limbaugh apologizes: mmflint.me/Awf562 (I know – what were they doing there in the 1st place?)

RT @pattonoswalt Ayn Rand would be very pleased with how the free market bitch-slapped Limbaugh today.

Dear Rush: Please don’t stop! You say what the R candidates don’t. Voters must hear every day til Nov what Republicans truly think of women.

Don’t give up, Rush! It’s a WAR ON WOMEN & you’re the Supreme Leader. Keep reminding voters how hate & violence drives the Republican agenda

Rush – As soon as u started losing the big $$ from your hate speech, you caved & obeyed the men who pay u. Who’s the prostitute now, bitch?

And BTW Rush, your vile & vicious attacks on me over the years – I wear them as a badge of honor. You are sad & sick & I’ve always pitied u.

The most obvious problem is Moore’s use of the word “bitch” as an insult to Limbaugh, which, in this context, is intended to simultaneously feminize Limbaugh, and to mock that feminization. Earlier in his barrage, he also retweets the use of the phrase “bitch-slapped,” which not only employs the same epithet, but also makes light of violence against women.

Now, both of these usages are quite common in popular culture, and people who use them are oftentimes probably not thinking about what they’re saying (although they should be). But when you’re taking someone to task for using sexually hostile language, there’s really no excuse for it.

Less obvious is Moore’s slam at prostitutes, specifically that they “obey the men that pay” them. However you feel about the morality of prostitution, this comment displays several levels of fundamental ignorance about the trade. Many of the women who engage in prostitution do so under the constant threat of violence, come from violent, sexually abusive backgrounds, and have no protection under the law. Call it a “choice” if you want, but even those who “choose” such a life don’t do so with the understanding that they must “obey” the men who pay them; a woman who has been paid can still say “no.”

In any case, the moralistic point of view that leads Michael Moore to insult Limbaugh as a “prostitute,” rather than as the never-insulting “gigolo,” is the same one that led Limbaugh to call women who use birth control sluts. Sex is a choice for men, and a shame for women.