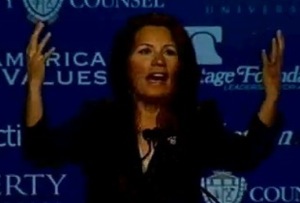 In it, she apparently takes the Tea Party’s main metaphor—that they are revolutionaries akin to the Founding Fathers who rebelled against British rule—to its next logical step, asking those assembled if they would like to “alter [their] government.” The enthusiastic response Bachmann draws, though, is a bit puzzling, since her speech itself is muddled at best and borderline incoherent at worst. Here’s an excerpt:

And you see, the Tea Party, like the great founders of our country, believes that governments are instituted upon men, like our Declaration says, and derive their just powers from us, the consent of the governed, and God gives us power. That’s what this document says, the Declaration.

That power emanates from an all-mighty God, and then God confers upon the individual power, and then the individual, in turn, confirms a portion of that power on the government, reserving all the remainder of the power to themselves. Do you see the genius of this magnificent document, called the Declaration of Independence? It goes hand in hand with what we know the truth to be.

And whenever any form of government, the Declaration goes on to say—which means the congress, the president, the supreme court, the federal agencies—when they become destructive of these ends, which are our inalienable rights, then it becomes our legal right to alter it or abolish it.

We’re hard-pressed to decipher what, exactly, this means—beyond the fact that Bachmann and her supporters don’t want the government to have too much power. (Earlier in the speech, the congresswoman makes this point even clearer: “The government doesn’t create money. We do. We’re the ones who do. But they’re busy trying to be our banker. They’re busy trying to be our mortgage broker…”) She doesn’t help her case by apparently conflating the Declaration of Independence with the Constitution.

Watch Bachmann’s speech in its entirety on C-SPAN.org, or see a clip below.