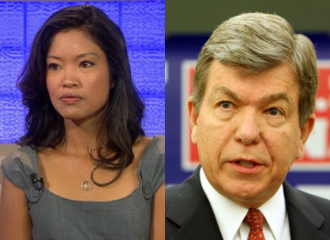 After conservative writer Michelle Malkin took to her blog Thursday to decry Republican politicians who have indicated a willingness to reinstate a handful of parts of President Barack Obama‘s Affordable Care Act in a potential replacement plan, Senator Roy Blunt (R-MO) took to Twitter to criticize her.

“These big-government Republicans show appalling indifference to the dire market disruptions and culture of dependency that Obamacare schemes have wrought,” Malkin wrote in the blog post.

She named Sen. Blunt as a specific example of a “Republican Surrenderist”:

GOP Sen. Roy Blunt of Missouri, vice chair of the Senate GOP Conference, told a St. Louis radio station two weeks ago that he supports keeping at least three Obamacare regulatory pillars: federally imposed coverage of “children” up to age 26 on their parents’ health insurance policies (the infamous, unfunded “slacker mandate”), federally mandated coverage regardless of pre-existing conditions (“guaranteed issue,” which turns the very concept of insurance on its head and leads to an adverse-selection death spiral) and closure of the coverage gap in the massive Bush-backed Medicare drug entitlement (the “donut hole fix” that will obliterate the program’s cost-controls)

In return, Sen. Blunt called Malkin out via Twitter:

.@RoyBlunt Let me be blunt, Senator: On what planet is the slacker mandate a “common sense health care solution?”

In turn, Sen. Blunt directed Malkin to read up on his official policy position:

.@michellemalkin You can read more about what I support replacing #ObamaCare with here: bit.ly/LWNLeI

.@RoyBlunt So you are for “guaranteeing access to fair and affordable care for all Americans.” How? Who pays? Not spelled out.

.@RoyBlunt U want “Universal Access Program” to expand high-risk pools. Obamacare already spending $5bil on these. How’s it working out?

Sen. Blunt never returned volley, but his office clarified his position to TPM:

“Senator Blunt has unequivocally opposed ObamaCare since it was first introduced. He voted against the bill, he led efforts to repeal the law in the House, and he continues to fight in the Senate to repeal and replace it with common-sense, bipartisan solutions to lower costs and increase care for Missourians,” said his spokeswoman Amber Marchand via email.

“One of the health care solutions that Senator Blunt supports includes allowing young people up to age 26 to stay on their parents’ health insurance, which would help cover more Americans while managing costs,” Marchand wrote. “However, Senator Blunt does not support expensive so-called fixes to the donut hole or federally-mandated coverage for pre-existing conditions.”

This could very well be a preview of another Tea Party-like swell should Obamacare be overturned and Congressional Republicans do reinstate several key portions of the law in compromise.