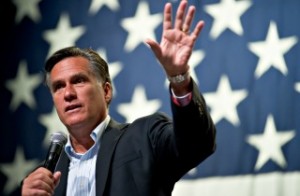 On the current state of politics, Romney noted that while a common trope states that Washington cannot get anything done, “Washington reflects the people who elected them.” In the United States, he continued, “people are becoming more and more divided.”

Axelrod pressed Romney on the impact of the lack of political correctness in today’s campaign. “You got in a jam for using the phrase self-deportation… that is mild compared with what Donald Trump has been saying about immigrants,” Axelrod said.

“I think Donald Trump has said a number of things which are hurtful, and he has said that they were childish in some respects, and I think will be potentially problematic in either a primary or a general election if he were to become a nominee,” replied Romney. “They relate to things he said about women and things he said about members of the new media. Things he said about Hispanics. I think he’ll have some challenges.”

Romney suggested that Trump’s abrasiveness could damage the Republican party “to an extent.”

“Some of the things he’s said — particularly about Hispanics — will be problematic, certainly for him if he were to go to the next stage,” Romney said. “Now if our nominee happened to be somebody like Marco Rubio or Jeb Bush, who have strong Hispanic roots themselves and connections themselves, that might not be as big an issue. But if it were maybe somebody else that didn’t have those connections, why it could probably remain as a shadow above their campaign.”

“Everything you say can and will be used against you in the court of public opinion,” Romney noted.

Check out the audio clip above.