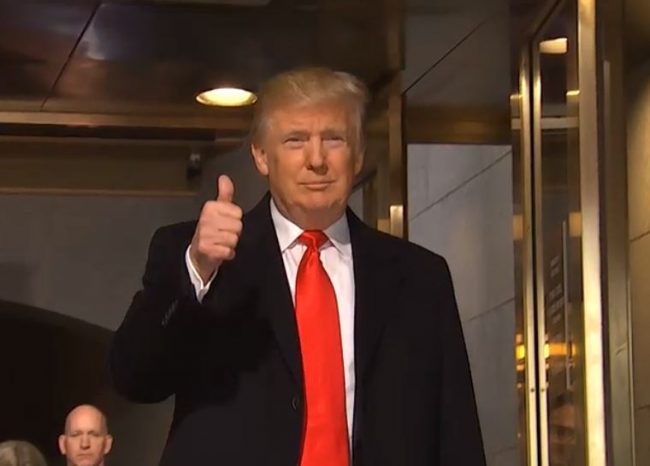 Are you tired of the old school way of buying drugs? You know, ones that arrive at your doorstep without the image of the President stamped on them?

Well, fret no more! The growing trend among heroin users is to peddle bags that are emblazoned with President Donald Trump‘s face all over them.

A Brooklyn man was arrested on Monday by police, and in his possession they found bags of the illicit substance proudly sporting Trump’s mug. This comes just days after cops took control of “thousands of bags,” of heroin in Florida that also included POTUS’ likeness as well.

24-year-old Carlos Rivera was wanted after he sped away from NYPD officer last week in Williamsburg, dinging several cars during his escape. But on Monday, cops recognized Rivera in a Brooklyn barber shop, arresting him on the spot and seeing the Trump-inspired paraphernalia on his person.

Cops say that at the time of his arrest, Rivera had as many as five open complaints against him. Rivera has since been slapped with several charges including felony counts of criminal possession of a controlled substance and intent to sell, as well as criminal mischief and reckless endangerment.

Earlier this week, a record-breaking drug bust in Florida left state Attorney General (and longtime Trump pal) Pam Bondi visibly upset. “So all I want to say to this drug dealer is: big mistake by putting the president’s picture on this. Big mistake.” Prior to the election, accusations swirled of pay-to-play arrangements between Trump and Bondi, whose reelection efforts received $25,000 from Trump’s foundation just as investigations heated up into Trump University.

She continued, “[H]e is going to be our most fierce advocate in taking this junk off of our streets. Can you believe this? Big mistake. And I’m going to make sure he gets one of these packages when the case is all over to put in the Oval Office to remind him of all the good he’s doing.”

Other bags of heroin seized earlier this year also bore the name of Joaquin “El Chapo” Guzman, as different modes of identification are frequently used by drug pushers. Trump’s image appeared “on some” of the 5,500 total bags that were seized by Florida police.