After Alabama Senator Jeff Sessions was spotted with his Asian-American granddaughter while waiting to testify at his Tuesday confirmation hearing, MTV culture writer Ira Madison III joked that Sessions had stolen her from a Toys ‘R Us. 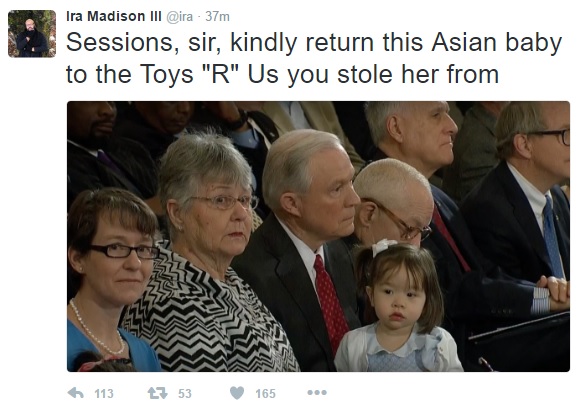 Madison received blowback from the left and right alike, but stuck to his guns, arguing that Sessions’ granddaughter was being used as a prop, and tying Sessions’ stance on immigration to the exclusionary snti-Asian immigration policies of the 1880’s.

Why is she a prop? Sessions argued for policy that in the 1880s was used to discriminate against Asian Americans https://t.co/sZitqzLBS4

In fact, Americans have long used Asian-Americans as “model minorities” since the rise of the civil rights act https://t.co/IwFwt4vXpX

Sessions has shown horrendous anti-black behavior. His love for an Asian family member does not dissuade that.

This is why you leave kids/grandkids out of political fights. No matter what side you’re on it makes you look like an asshole. https://t.co/8N54I1hpDM

UPDATE: 11:55 pm EST: A spokesperson for MTV has put out response to Madison’s tweet, saying “the opinions Ira expresses on Twitter are his own and do not reflect the views of MTV News.”