Muammar Gaddafi Was Captured By A Man In A Yankees Cap

Muammar Gaddafi Was Captured By A Man In A Yankees Cap 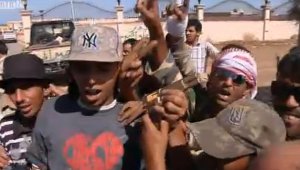 We’d driven the entire previous day and about an hour that morning, reaching the upper rim of Ngorongoro crater while the sun was still low. We’d passed two young Maori boys, who offered to pose for pictures with us in exchange for a thousand shillings. Their cows, untended, began to stray back toward the circular village lower in the valley. At the entrance of the road down into the crater, our guide explained that armed guards patrolled the crater, a wildlife refuge, and were trained to shoot poachers on sight. Sure enough, there was just such a guard, Kalashnikov slung lazily over his shoulder, bleary-eyed, in a bulky sweater. And, there in remote Tanzania, he was wearing a knit cap with a layered N and Y approximating the Yankees logo.

That logo is undoubtedly the most famous in sports. Other teams and franchises are more valuable (well, only two – the Cowboys and Manchester United) but no team has such a simple and simply replicated identity. All it takes is a piece of clothing – preferably a hat; ideally, a baseball cap – an N and a Y. Easier than a swoosh or a silhouette of Michael Jordan by far, it has exploded into ubiquity. Here, in Norway; here, in Austria.

The kid that spotted Gaddafi in that drainpipe yesterday? Yankee cap. He was a member of a revolutionary military force, armed, in pursuit of a wanted dictator. And when he found him, changing the course of a nation’s history, he was dressed like a frat guy who woke up just before class.

In 1990, Nelson Mandela visited New York. After a speech at Yankee Stadium, Mayor David Dinkins stuck a Yankee cap on his head. Mandela smiled and said, “I am a Yankee.” That’s what the Yankee logo says: I am down with Yankees. I get that New York is cool. I identify with American culture but not necessarily America. The Yankee logo is like when a stodgy company releases some sub-brand for younger, hipper demo. It’s America’s Monster Energy, our Scion – a brand we stumbled across that plays a lot better than the stars and stripes.

It’s hard not to recognize the parallels between the ball club and its parent brand, America. Consistent winners who expect to win. More money than God and not afraid to spend it. Cocky. Brash. Not deferential. A team and a country that brushes the dirt off its shoulders.

That’s the other thing the Yankee logo says: I don’t give a fuck. No ball cap is more popular among New York criminals than that Yankee logo. That’s the Jay-Z side: the swagger. When Jigga said he made the Yankee cap more famous than a Yankee can – he was probably right. People don’t wear the NY because they love Giuliani. Jay-Z whipped together a wickedly appealing blend of street, confidence, money, dominance. It’s the kind of attitude that makes a kid roped into a war think he can take out the untouchable man that ran his country. (Soft power: wearing a hat made universal by Jay-Z, a kid took out the dictator who last year hired Beyonce to sing at a party. Swag.)

When we got back to New York from Tanzania, we sent a T-shirt with the logo on it to the man that had been our guide in Ngorongoro. It was stolen from the post office before he could get it. Criminals love that logo.