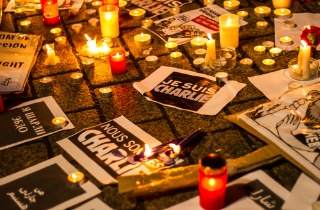 Rolling Stone‘s Matt Taibbi has been carrying on a correspondence with Denis Martinez, an inmate at Sing Sing prison in New York, who gives a fascinating view on how prisoners react to current events. And for the past few weeks, Martinez has been puzzled by how they’ve reacted to the terrorist attacks in France.

“You’re probably going to be puzzled by this, but there’s one group of guys who have unanimously and vocally expressed support for Charlie Hebdo’s decision to publish the prophet cartoons,” he wrote. “Muslim prisoners.”

According to Martinez, the Muslim population in New York’s prison system outnumbers any other group, “so when they have an opinion about something, unless the prinsoner is someone who’s a close friend, everybody else treads carefully to avoid World War III.”

He related the story of a cellmate, “Loudmouth Ali,” a large Muslim man who first saw the breaking news on TV:

“Stupid motherfuckers! They shootin’ unarmed dudes for some cartoon. That’s some coward shit.”

“You know what else is some ‘coward shit’?” interrupted Ricky. “When someone sends remote control planes to the other side of the world to drop bombs on ‘potential’ terrorists without a trial.”

Ricky is a muscle-bound, thirtysomething, dreadlocked Rastafarian man with a passion for ranting about geopolitics. He stood right in front of the TV, essentially replacing the ABC anchor. “Not only did those Haji motherfuckers warn them Paris dudes about the Mohamed cartoons years ago, but they went there personally and looked them in the face before the pushed their wigs back.”

“Still ain’t right,” countered Ali. “Muslims ain’t supposed to draw the prophet, but they can’t force a non-Muslim in a non-Muslim land to live by shari’a law.”

What did unite the inmates, however, was their discovery that the media was practically ignoring the massive Boko Haram massacre, in which 2000 people were killed by Islamic extremists, than they were by the Charlie Hebdo massacre. Or, for that matter, anything else:

You never hear about the types of crooks who actually do real damage to the economy, because the press is too busy covering the young, illiterate black guy who stole some Nikes. Even the language they use to describe crime is different. Older, educated, WASPy, white-collar bankers don’t steal billions of dollars. They “misappropriate” or at worst “embezzle” funds. And they never come to prison. In 10 years in Sing Sing, I’ve never seen one.

So it’s sort of a chickens-coming-home-to-roost situation. Do you really expect that centuries of colonization, imperialism and subjugation of the world by a small, powerful elite wasn’t going to create an angry global caste with (literally) nothing to lose? How much exploitation can someone take before he explodes?

The rest of the article — as well as the series of letters between Taibbi and Martinez — are below.