In addition to pop icon Rihanna causing a stir this week with a quickly-deleted #FreePalestine tweet, several pro-basketball stars have landed in hot water for Palestine-related messages they’ve posted to social media.

Over the weekend, New York Knicks power forward Amar’e Stoudemire posted to Instagram an image of a Palestinian boy and a Jewish boy in an embrace, with the caption “Pray for Palestine.” The image was eventually deleted, but was screen-grabbed by many outlets: 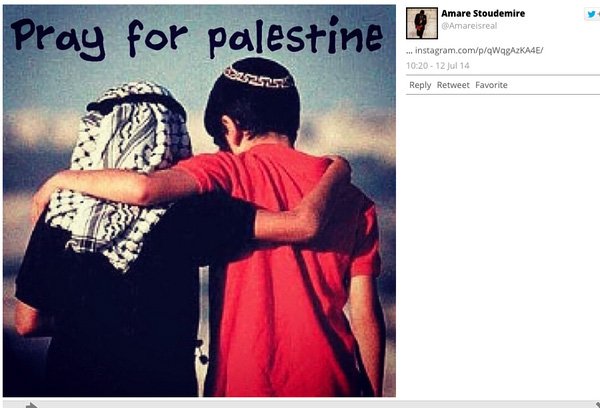 Because of the image, Stoudemire got into a heated war of words with Israeli-American model Becky Griffin, as documented by the Daily Beast.

Adding to the controversy is the fact that Stoudemire has ties to Judaism and the State of Israel: Questions have arisen as to whether the star athlete’s mother was Jewish; he recently applied for Israeli citizenship; he is part-owner of an Israeli basketball team; and has met with Israeli President Shimon Peres.

He deleted that message within 15 minutes, and issued a few apologies, vowing never to comment on international issues again:

previous tweet was a mistake. I have never commented on international politics and never will.

I apologize if I offended anyone with my previous tweet, it was a mistake!

Some have speculated that Howard’s contrite retraction was in part a protection against any animosity from Israeli teammate Omri Casspi.