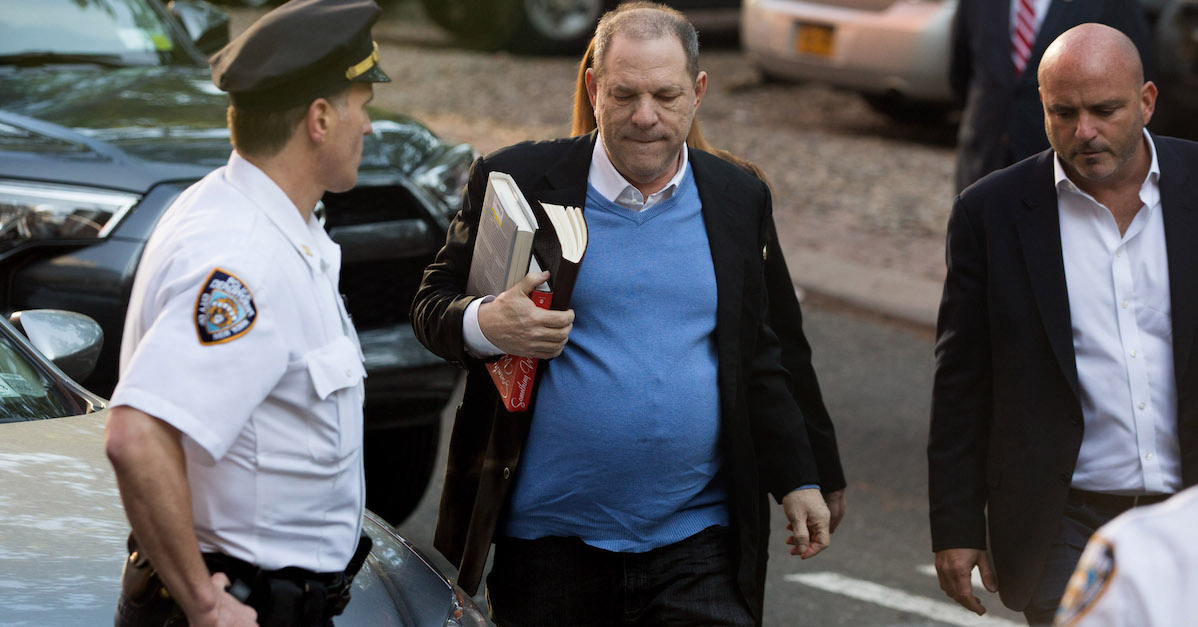 NBC News Chairman Andy Lack responded at length about how his network’s handling of Ronan Farrow‘s bombshell report on Harvey Weinstein, in an internal memo obtained by Mediaite.

Along with the memo, issued to his staff, Lack attached a document (titled “Fact Sheet”) detailing a timeline of what took place during Farrow’s investigation and included were the listed Weinstein’s efforts to combat the story. 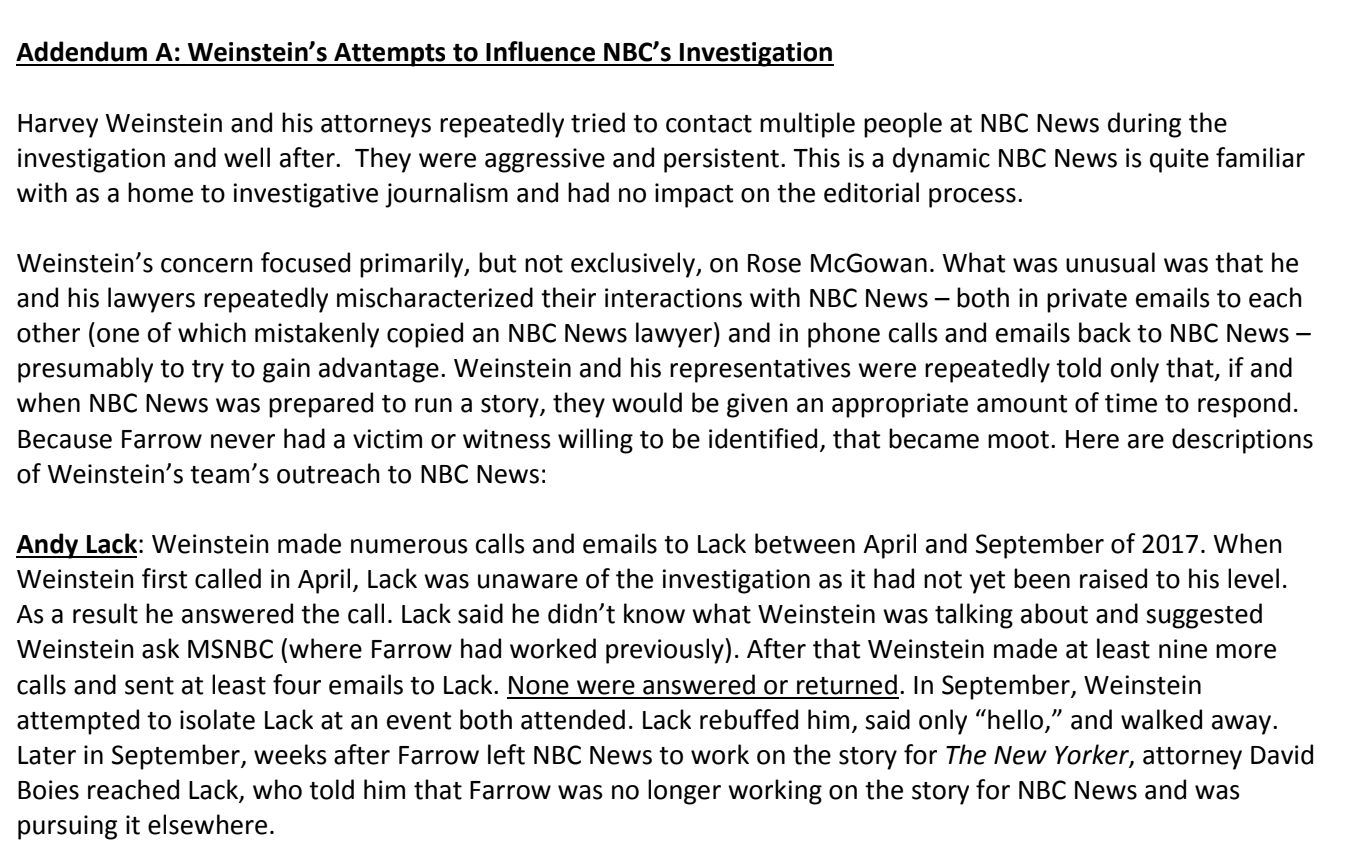 The memo said Weinstein “made numerous calls and emails” to Lack between April and September of 2017 and that when the chairman was first contacted, he was “unaware of the investigation” at the time. The memo stressed that while Weinstein made “at least nine more calls” and “at least four emails,” “none were answered or returned.”

Weinstein even attempted to “isolate” Lack at an event, with the chairman only saying “hello” and walking away.

NBC News President Noah Oppenheim had numerous interactions with Weinstein, the first being about the investigation in early August where he attempted to damage his accuser Rose McGowan‘s credibility. 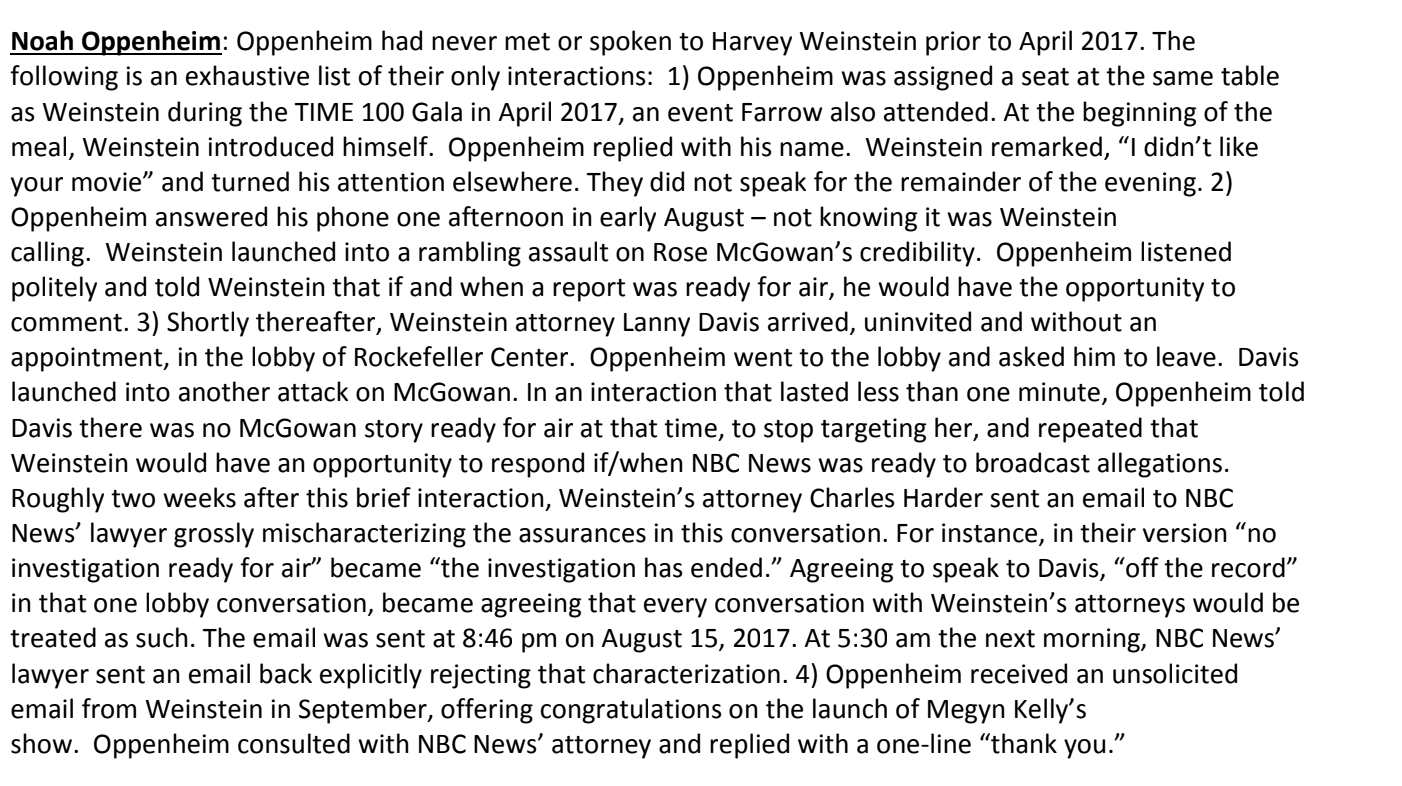 His then-attorney Lanny Davis arrived to the lobby of Rockefeller Center “uninvited” and continued the attacks on McGowan. Oppenheim assured Davis that her story was not “ready for air” at the time and that Weinstein would have the opportunity to respond once NBC News went public with the story.

However, another Weinstein attorney Charles Harder sent an email to NBC “grossly mischaracterizing” the interaction between Oppenheim and Davis, insisting he was told that “the investigation has ended” and that their conversation was “off the record” and every interaction afterwards would be treated that way. NBC News refuted the mischaracterizations in an emailed response. 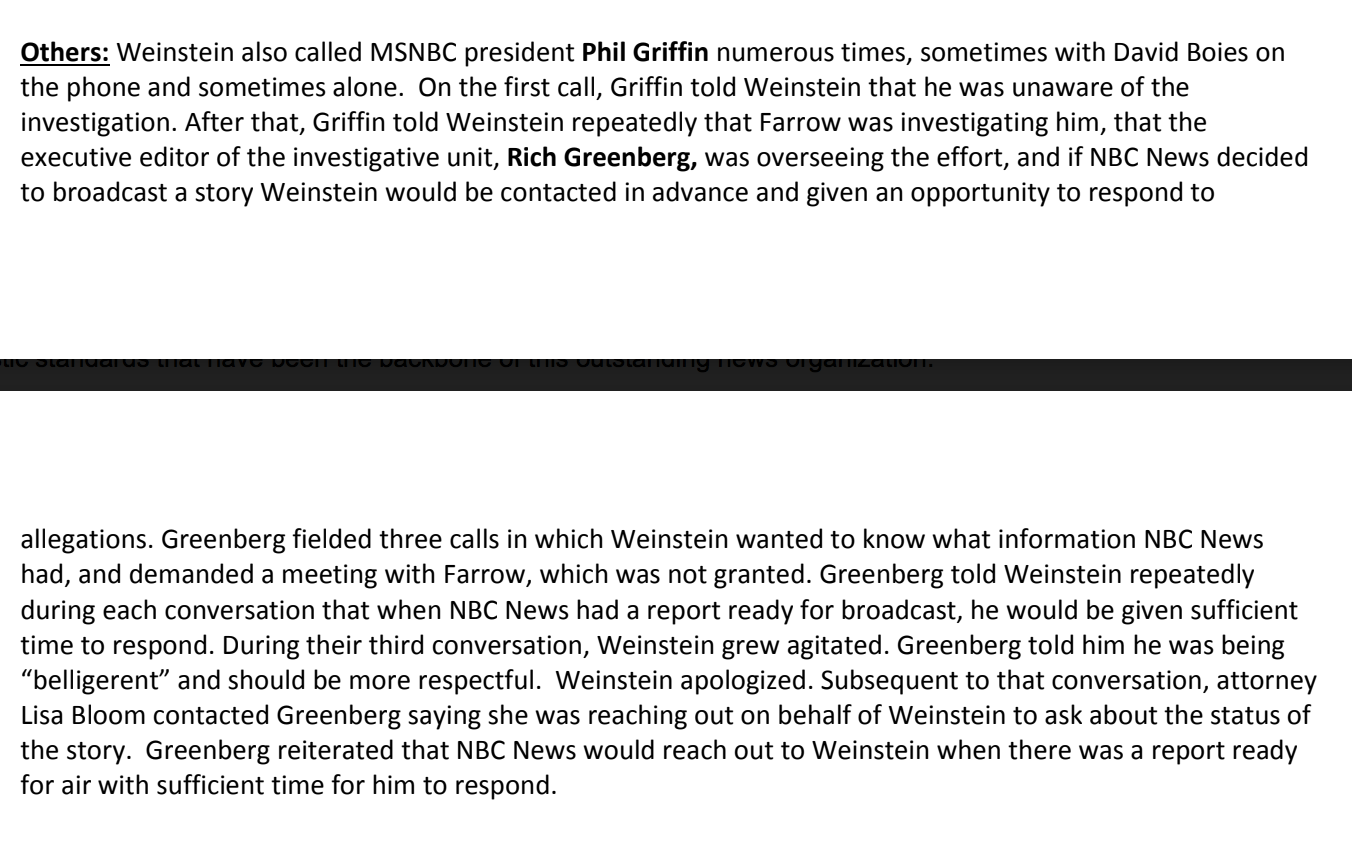 This is an unusual situation for a news division. In the last several days, questions surrounding how NBC News handled Ronan Farrow’s investigation of Harvey Weinstein have resurfaced. The following pages lay out all the facts dispassionately and in necessary detail – from start to finish. If you have any remaining questions, please don’t hesitate to ask.

For the past nine months, it has been our belief that the ‘story’ here is about Harvey Weinstein’s horrendous behavior and about the suffering and bravery of his victims, rather than a back-and-forth between a reporter and his producer and a news network. However, we’ve watched with disappointment as unfounded intimations and accusations have traveled through media circles.

At NBC News, one of our primary goals is to produce outstanding investigative journalism that stands up to intense scrutiny and has a meaningful impact on society. We had that goal very much in mind when we first assigned Ronan Farrow to look into rumors in Hollywood about Harvey Weinstein, as many other news organizations had done before us over the span of two decades.

We spent eight months pursuing the story but at the end of that time, NBC News – like many others before us – still did not have a single victim or witness willing to go on the record. (Rose McGowan – the only woman Farrow interviewed who was willing to be identified – had refused to name Weinstein and then her lawyer sent a cease-and-desist letter.) So we had nothing yet fit to broadcast. But Farrow did not agree with that standard. That’s where we parted ways – agreeing to his request to take his reporting to a print outlet that he said was ready to move forward immediately.

Seven weeks later, and five days after Jodi Kantor and Megan Twohey broke the Weinstein story in The New York Times, Farrow published the first in a series of outstanding stories for The New Yorker, winning great acclaim and attention, all of which is well deserved. That story cited the following victims by name: Asia Argento, Mira Sorvino, Rosanna Arquette, Lucia Evans, Emma de Caunes, Jessica Barth, and Sophie Dix. Not one of these seven women was included in the reporting Farrow presented while at NBC News.

We regret the deterioration of NBC’s relationship with Ronan, and genuinely wish we had found a path to move forward together. That is why, in August of 2017, when Farrow objected to his editors’ conclusion we convened an independent group of the most experienced investigative journalists in our organization to review his material with fresh eyes. We asked them — tell us what, if anything, we can broadcast. But their conclusion was unequivocal – this story is not ready for air. (Further, they found several elements in Farrow’s draft script which did not hold up to scrutiny – described in the accompanying document.) It was Farrow’s decision, in the midst of this process, to pursue the story elsewhere.

Had we refused his request, NBC might have ultimately broken the story, but we wondered then, and still wonder now, whether the brave women who spoke to him in print would have also sat before TV cameras and lights. If we had tried to hold him and nothing changed, we would have needlessly blocked him from disseminating it via another forum. And that is why we agreed to let him go elsewhere. If some believe that decision a failure of our competitive instincts, so be it. But it was a decision undertaken honorably and with good intentions toward Farrow and his work.

Contrary to recent allegations, at no point did NBC obstruct Farrow’s reporting or “kill” an interview. Immediately after Farrow had parted ways with us, he asked for NBC cameras to record another anonymous Weinstein victim. Farrow conducted the interview but we declined the request for a crew because we believed filming another anonymous interview would not get us any closer to clearing the threshold to broadcast, and because he had already informed us he was pursuing the story for another outlet. (The victim Farrow anonymously interviewed did not ultimately speak on the record for The New Yorker or The New York Times.) Furthermore, we were increasingly concerned that repeatedly asking victims to sit for anonymous interviews in front of television cameras on this subject matter was no longer a productive approach. (For the record, the first television interview with a Weinstein victim aired on NBC News on October 9.)

Finally, a word on the baseless speculation that some interference by Harvey Weinstein played a role in our decision-making. The accompanying document recounts every interaction NBC News executives and editors had with Weinstein and his attorneys. It will surprise no one that they were dishonest in their dealings with us, often mischaracterizing our brief conversations. But in each instance, their calls were either completely ignored or met with a boilerplate commitment to allow them to comment if and when something was ready for broadcast. None of this was kept secret from Farrow. None of it was any different from the calls we receive on every other difficult story our investigative unit regularly breaks. And none of it played any role in our decision-making.

Our Investigative Unit, led by Rich Greenberg, is filled with the best journalists in the business doing a remarkable job. They consistently shepherd difficult stories onto the air and drive the daily news cycle. Over the past year-and-a-half they have delivered an astounding 420 exclusive stories on politics, national security, business and technology and more.

As we get back to work this week, we will continue to pursue the toughest stories, in the most challenging circumstances, involving the most powerful people. And we will keep doing it while upholding the journalistic standards that have been the backbone of this outstanding news organization.

Thank you for your great work this summer. See the attached.