Netflix’s Mitt Shows a Warmer Side of Romney, But It Won’t Make You Reevaluate Him

Netflix’s Mitt Shows a Warmer Side of Romney, But It Won’t Make You Reevaluate Him 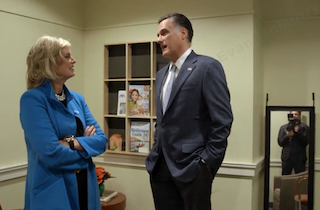 There are two scenes of prayer in Mitt, Greg Whiteley’s Mitt Romney documentary premiering this Friday on Netflix, and both are interrupted by the ringing of cell phones.

It’s the perfect encapsulation of a film that avoids, to a fault, the major events of Romney’s two presidential campaigns in favor of quiet, tense, and often touching moments among the Romney family—presented as a strong and loving unit yanked into a political centrifuge by their patriarch’s call to higher office.

Whiteley followed Romney from his first family conversation in 2006 about whether to run for president to several days after his loss to President Barack Obama. From this panorama comes a warm but almost claustrophobic film. Much of it is spent in hotel rooms; like a timid child, the camera hangs back with the family, as if scared to venture into crowds. Tagg Romney gets significantly more screen time than Paul Ryan, who doesn’t appear until election day; an uninformed observer would be clueless as to the running mate’s role. More time is spent debating whether there’s a food court in La Guardia’s Delta wing than debating economic policy.

In fact, policy is presented as anterior to Romney’s campaign. The couple times he’s heard voicing his economic ideals, he does so with conviction. But his free market ideology comes off more as a dry prerequisite to his run than an inducement of it. God is invoked a couple of times as the motivation behind the campaign, but often there’s just a general family consensus that Romney’s a smart and accomplished and good guy, and therefore he deserves a shot at being president. Anybody who already thinks Romney suffers from a sense of entitlement will not be dissuaded.

Perhaps this is why Romney is so concerned with dignity, a word that crops up multiple times. He complains early on that a roundtable debate lacks dignity; when then-(Republican) Governor of Florida Charlie Crist betrays him and endorses McCain, Romney sighs that at least he’ll lose with dignity. Counterpoised is the constant evocation of past losers: Gerald Ford, Michael Dukakis, Dan Quayle, George H. W. Bush, and John Kerry, this last haunting Romney like a liberal doppelganger. Every time Romney feels boxed in as “the flipping Mormon,” Kerry looms over him, a spook of undignified loss.

The film feels as convinced as Romney’s family that he’s a fundamentally decent joe conscripted into a bum election. But it’s greatly helped toward this belief by its telescopic presentation of the last six years. Mitt skips straight from 2008 to the first 2012 debate, which jumpstarted Romney’s campaign in the home stretch. We are shown literally none of the 2012 primary, in which Romney was often vicious and disingenuous. We never see Romney the family man call for undocumented immigrants to self-deport; the endearing guy who irons his shirt while wearing it never brags that he’s “severely conservative”; the “47%” comment is glossed over in thirty seconds, presented as a news cycle that happened to the campaign, rather than as a damning revelation of it.

Does Romney perceive these seemingly contradictory aspects of himself as coherent? Are the things he says in public just to get elected, and if so, does that prove his opportunistic reputation? Does he see crafting a false persona as an intractable part of becoming president? Is it worth it? Would he do it again? In other words: did Romney lose with dignity? It seems the question bothering him at the close of every day; the film goes nowhere near it. As such, it shows us another side of Romney without making him any more complex; we see him anew without any reason to reevaluate him. “No one knows the real you,” his sons are often heard to complain. We still don’t.

Perhaps this was what’s going the mind of Ann Romney, the quietest and most overlooked figure in the film. At the end of the ’08 campaign, she told the camera she’d never do it again. It’s an agonizing line. There was no “again”; her husband never stopped campaigning, furiously working behind the scenes to build himself into the 2012 frontrunner. We don’t learn what she thought of his second run, which often left her, suffering from multiple sclerosis, exhausted. In the film’s final seconds, her husband’s quixotic six year quest comes to a shuddering stop in their empty living room, and Ann holds back a sob. It’s an absolutely heartbreaking moment. With no cell phone to interrupt it, Mitt cuts to black.