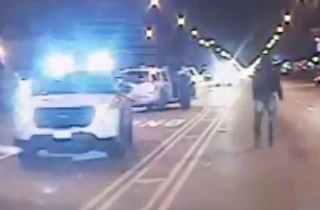 A FOIA request freed up a new audio file from the night Laquan McDonald died, and it turns out, police officers requested non-lethal backup to subdue the black teen before a cop shot him to death.

McDonald was killed in 2014, and his case became one of the latest sparks in national social justice protests recently, due to Jason Van Dyke‘s supposed brutality towards the 17 year old who he shot 16 times. These questions have included whether McDonald was an imminent threat to Van Dyke, whether Chicago’s police department mishandled the case by restricting the release of evidence, and whether officials like Mayor Rahm Emanuel should be forced to resign over the scandal.

The audio, released by NBC Chicago, was recorded when officers approached McDonald while he was allegedly acting erratically while breaking into cars and holding a knife.

“Someone have a taser,” an officer on the scene asked. “This guy is walking away, but he’s got a knife in hand.” Another officer replied he was on the way, but dispatch continued with “asking for a Taser for armed offender with a knife,” supposedly asking for cops who were closer to the scene.

It’s not clear from the audio whether a Taser was on hand when McDonald was shot. Within seven minutes of the initial call, McDonald was shot, and an officer radioed in with “shots fired by police, get an ambulance over here.”

While dash cam footage and security tapes from a nearby Burger King were released to the public, questions remain over whether both pieces of evidence have been compromised. Officer Van Dyke has been indicted on six counts of 1st degree murder, and Garry McCarthy resigned as police chief following a request from Emanuel.

Listen to the audio above, via NBC Chicago.