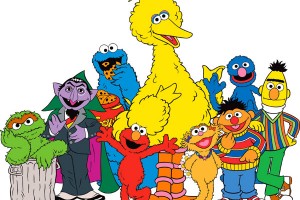 “C is for communism, that’s good enough for me”?

He points to popular shows of the last few decades that he believes were filled with overtly liberal messages. For example, he suggests Friends was promoting an anti-family values lifestyle and MacGyver was pro-gun control.

But the book is getting a lot of attention for Shapiro’s criticisms of the children’s program Sesame Street. It isn’t enough that the show is broadcast on PBS (which would be enough for some conservatives), but it has overriding liberal messages that Shapiro says is brainwashing young children.

Citing interviews with one of the show’s creators, early episodes of the show featuring hippies and racial reconciliation and, more recently, incidents such as 2009’s “Pox News” controversy, Shapiro writes that “Sesame Street tried to tackle divorce, tackled ‘peaceful conflict resolution’ in the aftermath of 9/11 and had Neil Patrick Harris on the show playing the subtly-named ‘fairy shoeperson.'”

He also points to Cookie Monster’s declaration that cookies are a “sometimes food” as evidence of an active liberal agenda attempting to conform young children to a particular lifestyle.

Two years ago, conservatives were outraged when Sesame Street made an innocent joke about Fox News. After watching the fictional Grouch News Network, a friend of Oscar the Grouch says, “From now on I am watching Pox News. Now there’s a trashy news show!” Rather than assuming it was a self-referencing joke about grouches loving trash, some right-wing bloggers cited this as evidence that the program had an overt liberal bias.

There are valid points to be made about liberal bias in the media and primetime programming, but the point of children’s television is to teach kids basic comprehension and critical thinking skills at an early age. Whatever political message may lurk in the background does not register with kids that young. When Elmo teaches young kids how to be more fiscally responsible, they don’t grasp the more complicated issues. All they learn are the basics, then as they grow up, they’re free to learn more and read up on subjects they choose, eventually developing their own opinions on important matters. “Sharing is caring” does not automatically equal “government handouts are okay.”

Hopefully, if Bill O’Reilly picks up this story, he’ll give the folks on Sesame Street a fair shake. After all, they did make a whole new puppet in his honor.