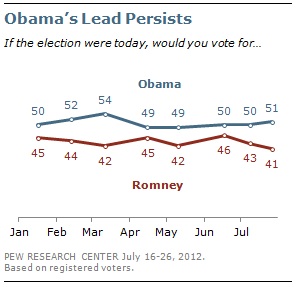 In a presidential race that has been virtually deadlocked for months, a new poll from the Pew Research Center shows President Obama with a hefty 10 point lead over Republican challenger Mitt Romney, hot on the heels of several swing state polls that also showed the President with commanding leads. While August polls have exactly zero predictive value, these numbers could accomplish something significant for Obama in the short run, or vanish with tomorrow’s jobs report.

One thing that’s of great significance in this poll, and to a lesser degree in those swing state polls, is that President Obama has finally managed to crack the elusive 50% barrier, which greatly enhances the perception of his chances of victory in November. The Pew poll also shows Mitt Romney losing acres of ground in his favorable/unfavorable ratings, with 52% of voters viewing him unfavorably, versus 37% favorable.. The bad news for the President is that, while his favorability rating is at 50%, his unfavorable is high, too, at 45%.

Numbers like these can change the narrative in the press, where most of this election is being fought at this point, and these results are well-timed to amplify the momentum the President has gained due to Romney’s disastrous overseas trip, and as the Obama campaign presses their advantage on the Tax Policy Center report on Romney’s economic plan, which has been getting huge amounts of press.

The race is still very close in other polls, with Obama holding only a two-point lead in Gallup’s daily tracking poll, and it’s only August, but the Pew poll, not known to put out outliers, can at least give Team Obama some room to breathe, and perhaps put some more pressure on Mitt Romney.

Of course, they also come the day before another jobs report comes out, in which the unemployment rate is expected to remain steady at 8.2%, which could sap much of Obama’s momentum. However, economists have predicted, for months, that the economy would remain sluggish, so it will be interesting to see how much those expectations are already baked into these poll numbers.

And just as important, all of them were from polling firms that had not shown especially good results for Mr. Obama previously.

Conversely, that the Pew shows a big lead for Mr. Obama is good news for him, but it was news that was already priced into the forecast.

Read his entire analysis here, and any other chance you get.