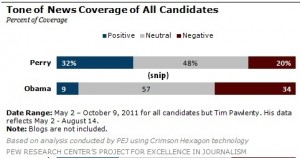 A new study by the Pew Research Center shows that, over the past five months, President Obama has received overwhelmingly negative coverage by the news media, far outdistancing his Republican rivals for the 2012 presidential race. Among other surprising findings, the President got negative press by more than 3 to 1 over positive coverage, while Texas Gov. Rick Perry led the GOP field in positive coverage, with a ratio of 3 to 2, but most of the candidates had more positive coverage than negative.

The report runs counter to the popular conservative idea of an “in the tank” mainstream media (I’ve never understood that metaphor. Is that a Mike Dukakis reference?), and illustrates exactly what the President (and his expected $1 billion in campaign cash) are up against. While the President benefits from the bully pulpit, he’s also held accountable by the media, on a daily basis, for just about anything and everything that happens in the country. In addition to running for reelection, he actually has to do stuff.

Pew goes into great detail about its methodology, but as a guy who thinks an algorithm is when you invent the internet and play drums at the same time, I’m not going to pretend to understand it. However, since they rated all of the candidates using the same yardstick, you can at least judge them relative to each other. Aside from the pounding President Obama is taking, there are some other surprises in the study: 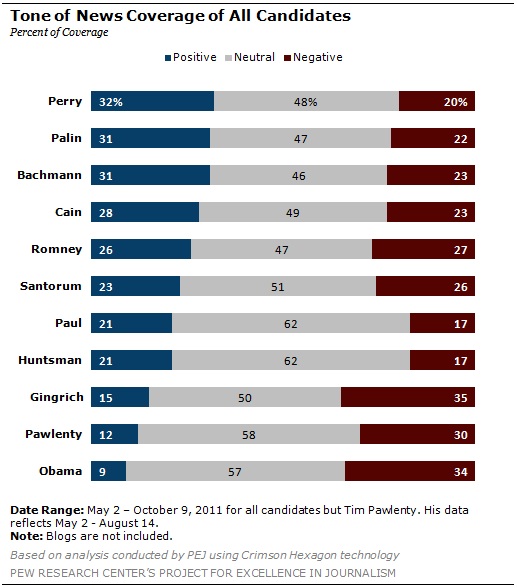 As you can see, not only has Rick Perry benefited from overwhelmingly positive coverage, but Rep. Michele Bachmann and polarizing non-candidate Sarah Palin have, as well. Current frontrunner Herman Cain is also on the positive side of the ledger, but it’s the Bachmann/Palin results that are really counter-intuitive, not just because the candidates play up their victimization by the media, but because, well, they just seem to get a lot of bad press. This portion of the study didn’t take coverage from blogs into account, which could help to explain that apparent disparity. Maybe the lamestream press is a lot fairer than they’re given credit for.

It’s also really weird that bland, inoffensive Tim Pawlenty comes out as the biggest whipping boy in the GOP field, although he still fared better than the President.

There are two results, though, that seem to confirm things that we already know. Steady establishment pick Mitt Romney hovered barely on the negative side of the study’s fulcrum, which fits the unenthusiastic narrative around the candidate, but also suggests the possibility that this is self-fulfilling to some degree. A month-to-month chart of positive coverage has Romney steady, if declining, relative to his GOP rivals, while the others experience spikes and dips that indicate significant buzz around their candidacies.

The study also looked for relationships between the candidates’ news coverage, and their treatment on blogs. Predictably, Ron Paul was the only GOP candidate to fare significantly better on blogs than he did in the news media. The President also did slightly better on blogs, 14% positive to 36% negative.